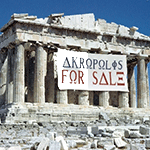 I have remarked many times before on Paddy Leigh Fermor's good Greek bad Greek thesis. 99% of Greeks are generous, honest, good folks. The other 1% are such complete and utter bastards that their actions serve as a stark reminder of how incredibly good their fellow countrymen are. The lying traitor of a PM, Alex Tsipras is firmly among the 1%. So too, are more than a few taxi drivers in Athens.

The Aegean flight to Athens was staffed by 99%-ers. All passengers were given a candle with a ribbon as we boarded. This was to celebrate Easter. The hostesses smiled. Not the fixed, forced and robotic grimace of a Ryanair staffer but a warm smile like they really were happy to see us and share some Easter joy with their fellow human beings. After a lovely lady handed me a pre-ordered diabetic meal as she whispered "here is your special meal," as if my condition need be kept hidden, the crew were even more kind to an ailing old man. Actually I feel greatly improved.

The meter showed 50 Euro as my cab from the airport pulled up at the bus station. So I handed over a note. 5 more Euro for the toll said the driver. I have done that ride many times so know full well that tolls are not "on top". So I waved my finger and told him in "Greeklish" where to sling it. But many first time visitors to Athens will fall for what is just blatant theft. It is a bad first impression to give a visitor. It is the sort of thing that discourages a return visit. But the 1% do not care about that. They are just bastards to the core who will steal and cheat whenever they can.

But if you happen to meet such a Greek, please just smile, think of Paddy and think of the 99% who, in spite of the unforgivable misery heaped on this country by the EU, the banksters, Tsipras et al, remain the most hospitable and warmest folk on this planet.

Angela Merkel arrived at Athens the other day. At passport control she was asked "Nationality". She replied "German". The Officer continued "Occupation?" "Not this time" she replied.

Boom boom...hat tip David Scott for that one.