Photo: Picking gooseberries in the glorious English Rain at Shipston - how I would miss our summer rains

In Greece the summer rains are violent. Dark clouds gather above the Taygetos Mountains above the Greek hovel or sometimes out to see in the bay of Kalamata. The wind starts to pick up and you can hear it unsettling the trees, after a while the rustling of the leaves is so loud it sends a clear warning of what is to come. Thunder booms loudly, you start to see lightning and before you know it the rain is pouring down. You can be drenched, a dripping rat, within a minute or so as the skies empty.

And then it is over. vast puddles lie across the mud track that leads up to the hovel. The mud is slippy and your car or motorbike slides its way up and down the hill but the sun is beating. Soon the land is steaming and within a day or so the puddles are gone.

If you are lucky the thunderstorm whips up at night, breaking the oppressive summer heat and allowing you one night of contented sleep. But whenever the rains break it is a violent affair. If you doubt me, listen six minutes into this podcast when - as I recorded - the hovel was struck by lightning.

By contrast, in England the heat is less intense. The rain arrives more often and is not the warm rain of Greece but a colder if less violent downpour. Such were my thoughts as I picked dessert gooseberries in my father's garden at Shipston.

Almost thirty years ago when my father and late stepmother, who died a year ago yesterday, moved to Shipston their four hundred year old house was in an awful state and the garden was just a total mess. They worked hard to create a wonderful central lawn, sprawling flower beds and a fruit and vegetable patch which year in year out has yielded potatoes, lettuces, broad beans, tomatoes, raspberries,m strawberries, red currants, black currants and both dessert and normal gooseberries.

Gardeners still pop in once a fortnight to keep the place in order. But my father rarely ventures into the garden and the soul has gone from the place this last year. The six of us (my two sisters and three steps) all visit and do our best to harvest what is there. It is a duty to my step mother and father not to let it go to waste. And so I sent the last of the raspberries back with the Mrs and Joshua on Sunday and as I waited for a lift to the station I picked half of the dessert gooseberries. Normal green gooseberries are just too bitter for my palate. I can't see why everyone does not use the purple dessert variety.

If I end up spending more and more time in Greece I shall miss the English summer rains, thought I, as I slowly got wetter and wetter, dutifully cleaning the bush. 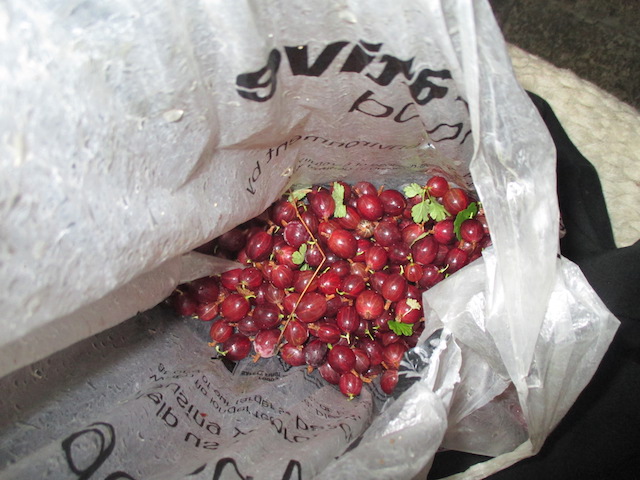 Photo article from the Welsh Hovel - the final fruit harvesting

I harvest not just for myself but for the pensioner couple one house up the lane and 95 year old E one house further up. And so we have a small number of crab apples from the two trees I planted this year – enough for one small pot of crab apple jelly, the last of the damsons for gin and then stacks of cooking apples from the orchard by the river and pears from a tree in the centre of the vegetable patch. Then finally some rhubarb which I planted this year…I have promised the family rhubarb crumble this evening. But will also be making apple jam, pear jam and maybe a bit of rhubarb and ginger gin.

Photo Article from the Welsh Hovel - Quincey in action