The magazine written for millennial women, Marie Claire, has slated the film Dunkirk. This time it is not about its factual accuracy in having a male and white cast. This slating from the liberal media is even dafter. The tweet below says all you need to know about this 80 year old market leading title which, a former editor stated "is read by intelligent women who are in tune with global ­iss­ues." You have got to be kidding.

According to the magazine the film Dunkirk is "an excuse for men to celebrate maleness". Really. And there was I thinking it showed tens of thousands of young men being slaughtered, making the ultimate sacrifice as they fought the evils of Nazi Germany. It is a bloody accurate reflection of that horrific defeat but a defeat which could have been so much worse but for the bravery of so many folks "celebrating maleness," bravery which almost certainly stopped Germany from conquering the UK back in 1940.

The ignorance of ones national history is shocking and one hopes that if the young women who read this title really are intelligent they will share my horror at that ignorance but also at the sheer silliness of the comment. I bet you that the dumb snowflakes who do read Marie Claire will not bat an eyelid.

Marie Claire will carry on serving up garbage like this. The well paid young women who produce the title will consider their work important. Silly women will read it and believe what they are told. Our national story will slowly be forgotten or dismissed as irrelevant. Britons will be told that our collective past has nothing to do with who we are today. After all history contains far too many DWM's - Dead White Males - so cannot be relevant can it?

Like many others watching this spectacle, perhaps I am just a grump old man pondering the sad decline of this country as it is engulfed in a tide of such utter nonsense. 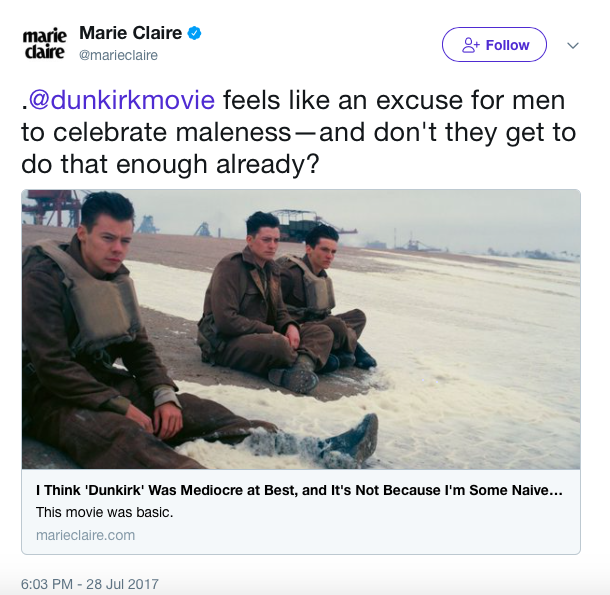