As the White House renovations continue, President Donald Trump has, for three days, moved his office back up to his home in New York, Trump Tower. As POTUS prepared to arrive protesters gathered to express their outrage that their beloved crooked Hillary was not President, oops I meant at the Donald's awful policies. And the crowd was, according to libs tweeting and whining all over social media, "massive" as you can see below. 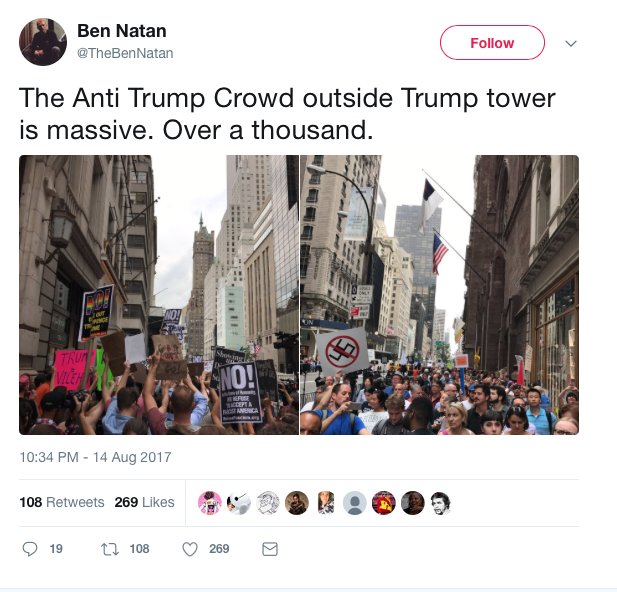 Hmmm 1000 people in a City of 8.6 million is massive. Putting that in context, the population of the twon in which I grew up, Leamington Spa is 49,491. If the level of outrage against Mrs May in Leamington is as massive as the level of outrage against President Trump in New York then there would be a crowd of six folks massing outside the Pump Rooms to show their anger.

That fewer than 1 in 8,600 folks in a City which voted massively Democrat on November 8 turned out to protest is not in any way shape or form "massive". I guess liberals don't do maths except when it comes to spending as much of other fplks cash as they can.

I see that the placards include a good few suggesting Mr Trump is a Nazi. How often does it need to bne said that if you go calling everyone who is to the right of you a Nazi then the term Nazi loses its meaning. The folks who killed 6 million Jews were Nazis. The knuckleheads in Charlotte over the weekend were neo-Nazis. Donald Trump is just a conservative. Calling him a Nazi trivialises the awful acts and thoughts of those who really are Nazis and is sadly typical of the moral bankruptcy of today's left.