Tory MP Christopher Heaton-Harris seems to be in a spot of bother in certain circles for writing to university vice chancellors asking for a list of those lecturers who were running course material on Brexit and asking to see that course material. That is what actually happened but the BBC's senior reporter John Simpson tweeted out something rather different. This is fake news surely? 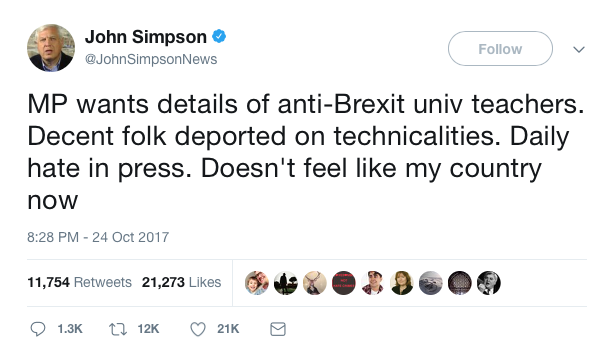 Mr Heaton-Harris has his suspicions as to how the fortress of the liberal elitist left that is British academia is teaching our young folks about Brexit. So do I. Academia voted overwhelmingly to remain and as we have seen time and time again on campuses across the West those who dissent from what is deemed the orthodox view, that is to say the Guardian editorial line, are just not tolerated. Whether it be on global warming, transgender rights or Brexit the debate is settled and dissent is just not allowed.

But it could be that the Universities are teaching Brexit matters in an even handed manner with professors giving equal weight to arguments for and against and allowing their students to make up their minds. I hope that is what is happening. Mr Heaton-Harris made a request so that the facts are known. That seems utterly legitimate.
He did not, as Simpson asserts, demand details of anti Brexit teachers. That would be wrong but it did not happen. Yet the most senior BBC reporter tweeted that it did. It is fake news. Why am I forced to pay a poll tax for the bloated salary of a tweeter of fake news, or lies as they used to be called?

Academia, including my Mrs, has reacted with outrage. I managed to stifle a laugh as she complained about the burden of work that would fall on stressed academics in complying with this. Surely they could find ten minutes during the forthcoming reading week, or during the 26 weeks a year when they do research during student holidays, to email over their lectures on this subject?

But the Mrs and others also bleat about Government interference in academic freedom. The move was branded "McCarthyite" by Prof Kevin Featherstone, head of the European Institute at the London School of Economics and "sinister" by Prof David Green, the vice-Chancellor of Worcester University who likened it to Newspeak and the Thought Police from George Orwell's Nineteen Eighty-Four.

Of course it is nothing of the sort. There is no proposal to ban anything. But surely as the taxpayer funds academia we have a right to know what is being taught? Had a Labour minister asked that all academics hand over course notes on immigration to establish that it was being taught in a fair manner would there be any objections? Of course not. It is right that all such matters are taught fairly and in a balanced manner with real debate allowed and indeed encouraged.

If academia is, indeed, embracing such an approach to its teaching of Brexit it has nothing to fear or to hide. The way that it has attacked Mr Heaton-Harris with such venom only confirms the suspicions of folks such as myself that, in at least some cases, its approach is far from balanced and that, like global warming, it regards Brexit as "settled science" with only one possible viewpoint deemed acceptable.