Photo Article: Can I buy your sawdust? I said to the man with the sweetest kitten - he looked puzzled

George the architect is a modernist. I am a traditionalist. And thus at every stage of the design and reconstruction of the Greek Hovel he has an idea, my heart sinks, we discuss it and we reach my conclusion. And so last week we took a trip to a windows, shutters and door factory in the neighbouring village. I say factory, it was a big shed with - as far as I could see - the boss and just one employee.

The matter of shutters was not up for dispute. The Mrs had sent over a photo of her favoured - traditional - design. George tried to suggest we look at newer ways which...I cut him off. The Mrs has decreed, we don't argue. So that was settled. Doors were also settled in that we had sent photos of the big external door at Paddy Leigh Fermor's house down the road in Kardamili. Take away the grill and we are there. Again. Don't argue with the Mrs.

So we entered the factory and George and the boss took us over to a demonstration window frame which was clearly of the modern style. Complex machinery allowed the windows to tilt open as well as be flung open to let in the snakes. I let George and the boss gabble away for a while. I was distracted by the two factory cats and a small kitten which was playing happily. 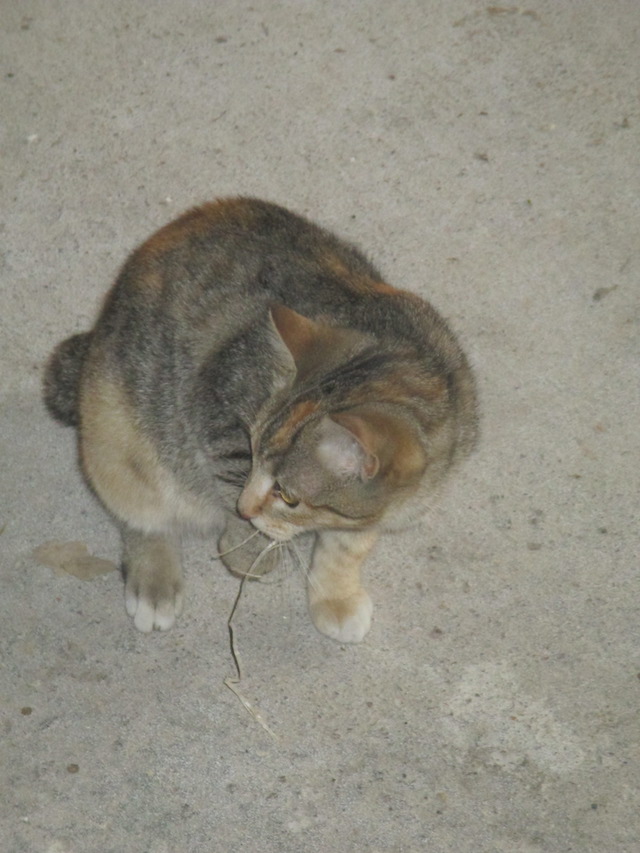 After a few minutes George and the boss looked at me. I know that the window is expensive, modern and that when the complex joints and bolts break it will cost an arm and a leg to get a little man out from Kalamata to mend it, especially as he will have to order in new parts from Germany which will take weeks.  Besides which our house was first built in 1924 not 2014. So I said no and looked at the windows of the factory itself, old style and simple. The message got through.

So we moved on to discuss which wood we should use and after that I looked at the big bags of sawdust piling up and asked "what do you do with that - can I buy it from you?" The man looked puzzled, he just gives the dust away to shepherds for winter bedding for their flocks. Of course he'd be delighted to help but he still looked  confused.

George had to explain to him about how you use sawdust with an eco-loo. Not speaking Greek I'm not sure into how much detail he went. But the man nodded and understood. Another problem resolved.