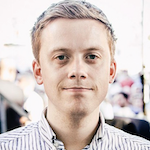 Yes there were clear electoral irregularities in the Russian Presidential Election. But rather like Nixon in 1972 Vladimir Putin did not need to cheat to win.The headline number is that Vlad got 75%. Whether the real; number is 65% or 55% who cares, he won and he won easily.

For the fact is that an awful lot of Russians like Vlad. He refutes the LGBTI and Christianity bashing bullshit which dominates the Western liberal agenda. In a conservative and religious country that plays well. He has made a Russia that was broken and humbled at the end of the cold war feel great again restoring a sense of pride in a nation where patriotism is not someone one is meant to be ashamed of. Gone iks the grinding poverty of the socialist and post socialist era, Russians have never had it do good.

In defending Russian speakers who, by a quirk of history, found themselves in a Ukraine where Russian was being banned as an official language, he showed that Mother Russia cared for all its people. He does not bother taking prisoners when fighting Islamic terror. Hee is certainly not offering a bump up the housing waiting list to ISIS fighters who want to go back to Mother Russia.

Putin may not be top of the pops in the West but in Mother Russia they really do like him. So how does the Western liberal media and political establishment react. Presumably it is blaming Russian bots just like they do when any other election goes the wrong way for them?  Nope. They are even dafter than that.  Over to all round leftard millionaire socialist and Guardian columnist Owen Jones who tweets: 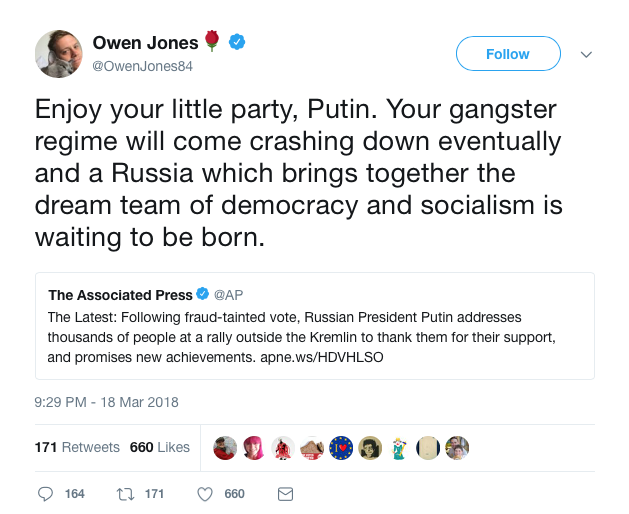 Hmmm. Owen so how many Russians were murdered when the country last tried out socialism? Was it 20 million or 30 million? I suspect that young Master Jones was not even out of nappies or perhaps not even a glint in his father's eye when the USSR oppressed its people creating untold misery, poverty and state sponsored murder in the name of socialism. Mr Jones, like so many young people, is ignorant of history for he looks only to the future without learning from the past.

Back in what was the USSR there is no craving for socialism. Folks there are just happy to be living in a society which, under Vladimir Putin, is richer, more free and far less murdersome than that which Jones harks back to as some sort of golden era.