No! Remoaning obsessive Anna Soubry MP it is YOU who are sinister

MPs are meant to be our servants. Not the other way round. It is a point repeatedly lost of many of the expense grubbing toads of Westminster. Anna Soubry MP who last year claimed £203,228.11 in expenses and who once - charged the £14 cost of delivering remembrance day poppies to expenses -  is one MP who really does not get it. Today she has attacked the Daily Mail as "silly and sinister". Okay the Mail is a rag but that is not the point.

The press should hold all MPs to scrutiny exposing what they do so that we the electorate can make up our own minds in an informed way. The Mail's scoop was to reveal that Soubry's fellow remoaning Tory MP Dominic Grieve who claims like her to respect the EU vote but to want to get the best terms, had met with a stack of folks from other parties and his own who are campaigning for a second vote to overturn what, we were all told was a binding poll, on June 23 2016.  It is surely in the public interest to know that a man claiming to be trying to get a better Brexit is talking to those who want to stop it altogether.

So it is not "silly and sinister" for the Mail to expose it. What is, not silly but is very sinister, is when our servants, that is expense grubbers like Soubry, try to suggest what articles a supposedly free press should be running about them. What is it that Ms Soubry does not understand about the idea of a free press? 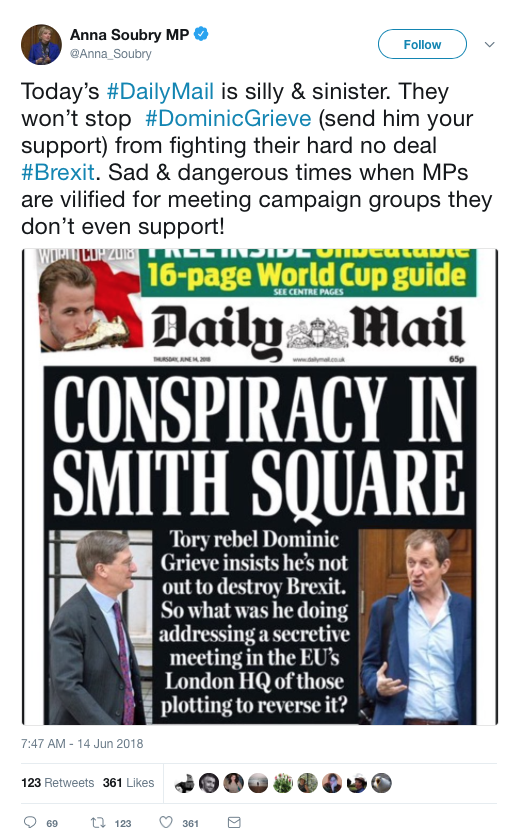