Photo article - the burial of Oakley

The lady at the vet called during last week and in a very sweet and sympathetic manner said that the ashes of the King of cats, the late Oakley, were ready for collection. And so on Saturday morning I drove to the cat hospital and said who I was and why I was there. "Would you like to settle your account before collecting?" said a mean faced old shrew. It was not a question.

£286.14 poorer - and that was only a fraction of Oakley's bills from the last two weeks of his life - I was presented with an ornate bag containing an ornate cardboard box containing Oakley's coffin which you can see below. Shake it and you can hear, what I hope are, his ashes inside.

On Saturday evening with my daughter supervising Joshua who was watching Paddington bear the movie for the fifth time in a week, myself, the Mrs, Oakley's biggest fan our friend and neighbour Mu and hipster pro cat-sitter Terry headed to the back garden. The coffin was placed in a hole about a foot away from where the wooden urn of Kitosh's ashes was laid to rest and is, I hope, now rotting away.

We all said a few words, a few tears were shed, we each raised a glass of Metaxa and toasted "the King" and then the urn was covered with earth which we have marked with a stone pro tem. We'd like to plant something there preferably a herb as Oakley really liked smelling mint or lavender. But the earth is underneath our fig tree and the vine in the garden only makes it even more shaded. So dear readers: what pungent herb would prosper in such shade? Answers in the comments section below.

Last night as I climbed into bed was one of those times when I really missed Oakley. Both the Mrs and I thought at the same time, how we wished he was there, launching himself up onto the duvet only to annoy us with a fishy kiss at 4 AM and a demand for his first breakfast.  Joshua still refers to this house as Oakley's house but he is mentioning him less and less. He seems to accept that he is not coming back. 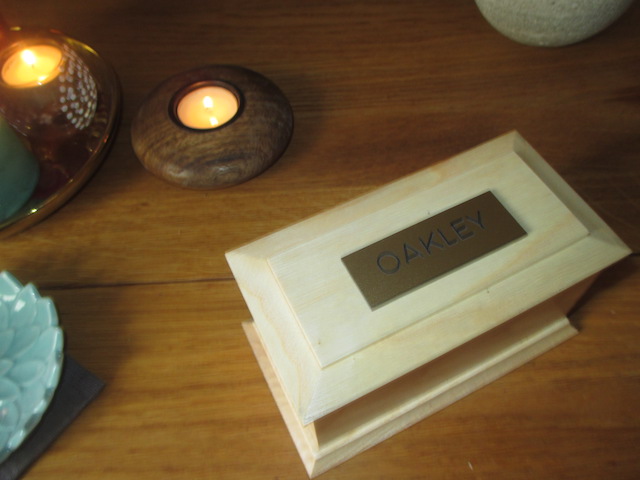