If Elizabeth “Pocohontas” Warren has strong native American links I’m a banana, or at least a Swiss on a roll

Throughout her career at Harvard and then in the Democratic party Senator Elizabeth Warren has claimed to be part native American. In a, rather good. joke Donald Trump has termed this prissy New England liberal "Pocohontas" because she is patently almost entirely white. Put it this way…Hitler and the Nazis would, in genetic terms, have had Pocohontas down as one of them, a fully paid up member of the Aryan race. Now to prove Trump wrong as she eyes a 2020 Presidential bid Pocohontas has taken a DNA test.

The Liberal media is delighted. As you can see below CNN talks of “strong evidence” of native American ancestry. Well up to a point.  Apparently there is some Native American DNA in Pocohontas enough to suggest an ancestor between six and ten generations ago, probably eight. So that would make Ms Warren 1/256th Native American and 255/256th white as the driven snow. She is 0.39% native American and 99.61% white. Hmm, that is not really very Native American is it? Certainly not enough to be used by Harvard to justify its boast that hiring Ms warren showed its affirmative action policies towards non whites in action.   I can think of many millions of Americans rather more deserving of that status can’t you?

My Booker cousins, the sons of Uncle Chris, have just taken DNA tests showing that they are – from their mother’s mother’s side – 1/12 Ashkenazi Jews. On the Warren scale of ethnicity I put it to you that both boys should become rabbis and head off to Israel to run for the Knesset right now. Let’s get belated bar Mitzvah’s organised for them now as the family prepares for Yom Haaliyah which is tomorrow. You know I bet both boys have forgotten about that but they must stop being such bad Jews and I will call them and remind them.

And, of course, I am 1/64th Swiss. That makes me four times more Swiss than Elizabeth Warren is Native American. I guess CNN would say that there is really strong evidence of my heritage. Hey Swiss folk, with no offence to my newly Jewish cousins, where is my share of that Nazi gold?

Senator Pocohontas has traded on her Native American heritage for her entire career. She is exposed of somewhat bigging those claims up by her own DNA tests. She deserves ridicule and the Trump nickname is, in that context, wholly appropriate. 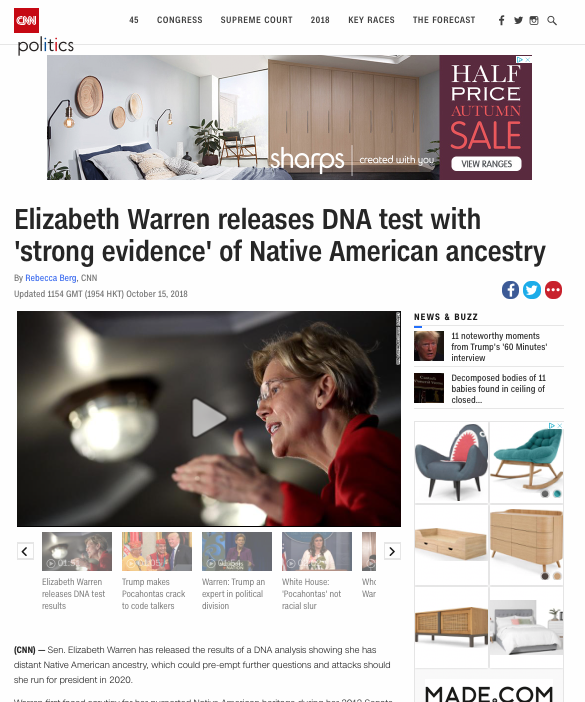