Kleenex drops ManSize tissues because they are sexist, but surely they are still racist and size-ist?

Here we go again. Once again a big multinational has buckled to a handful of compliants and desperate not to be seen as racist, sexist or homophobic has had to make a major strategy change. This ritual capitulation by evil capitalists to a small mob of semi-professional grievance merchants is now an almost weekly occurrence. The victim here is Kimberley-Clark,, the owner of Kleenex which for 60 years has made “Man Sized” tissues. 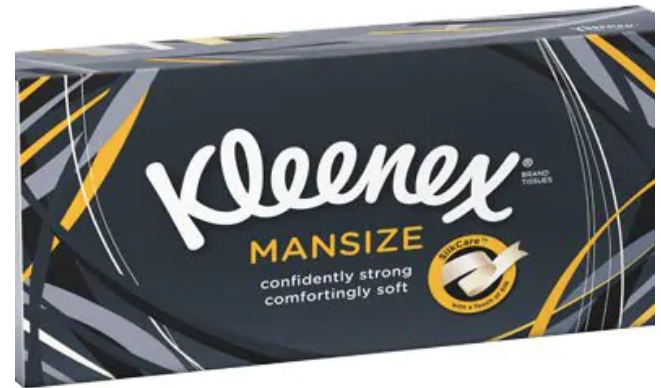 A spokesperson for KC said “"It was launched at a time when large cotton handkerchiefs were still very popular and Kleenex offered a unique disposable alternative. Despite that our consumer service is registering consistent increase of complaints on gender concern related to Mansize sub-brand.

Kimberly-Clark in no way suggests that being both soft and strong is an exclusively masculine trait, nor do we believe that the Mansize branding suggests or endorses gender inequality. Our Mansize tissues remain one of our most popular products, with 3.4 million people buying these tissues every year.

Nevertheless, as we remain committed to developing the best possible products for our consumers and take any feedback extremely seriously, we decided to renovate our current product and update the product sub-brand as Kleenex Extra Large."

Whatever. Is this still not both size-ist and racist. The implication that small entities are not as much up to the task as large ones is offensive while the fact that these issues which clean up dirt are white while dirt is coloured is clearly racist and offensive. How is my poor wife who is both very small and also of Indian origin and thus brown (am I allowed to use that word in today’s virtue signalling minefield?) meant to feel about Kleenex Extra Large? Surely she and millions of others feel alienated and offended?

Of course they do not. And whilst a vocal minority who seek offence and victim status may have bleated about the sexist tissues the numbers will have been tiny compared to those who carried on buying happily. Yet week big business yet again buckles. Pathetic but sadly just something that happens more and more.