As you might have guessed I regard Theresa May as a treacherous liar and the worst Prime Minister in history. She once called the Tory Party the nasty party but today it is the left in Britain which is truly nasty. The weaponisation of actual suicides as a stick to beat the wretched May is just a new low. Yes, for me, this is personal. My mother killed herself. I have struggled with depression and mental breakdown and have discussed both matters openly. In my wider family there have been three more suicides since 1933. Suicide is a very serious issue which we should be able to talk about openly and honestly. Yet..

The tweet below seeks explicitly to link the death of one young mum to the actions of Mrs May. Natch it was widely "liked" and retweeted hence I stumbled across it thanks to financial journalist Christopher Menon who then defended it to the hilt. As a financial journalist it is particularly sad that Menon's anger and hatred of the Conservatives makes him unable to look at hard data.

There are so many complex factors that drive one to the edge to make that ghastly and, in the case of a mother, terribly selfish decision to end it all. Whether the State spends more or less on mental health care will not really address those issues - honesty and being able to talk openly about suicide might.

Much though I despise Mrs May, weaponising the death of a young mother at her own hands, especially when hard data flies in the face of such a statement, is just truly despicable. When the left proclaims its nastiness in this way surely  any balanced and fair person must recoil in disgust. 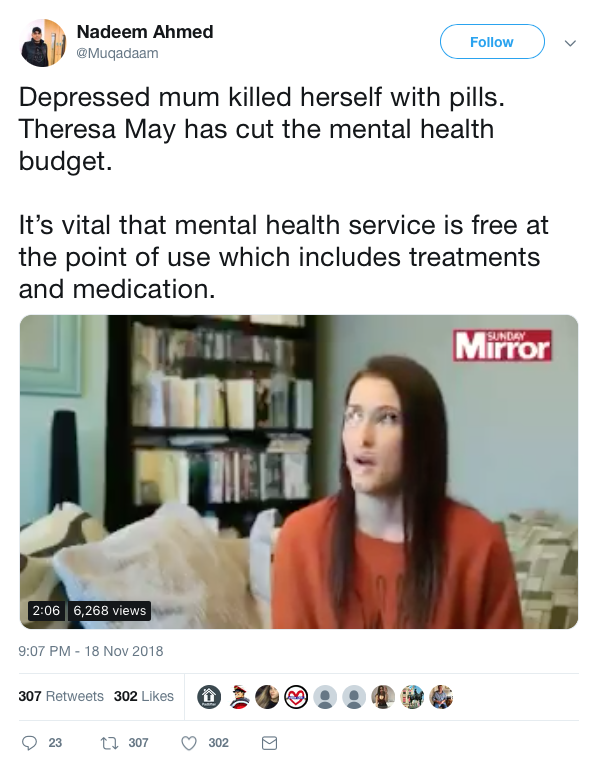