Yes I am a rabid Brexiteer. I want the country where, regrettably, I spend most of the year to be free to make its own laws, set its own taxes, control its own waters and chart its own destiny. I have faith that Britain can do that.  Yet for sneering metropolitan elitists like the twit who tweeted me last night, as you can see below, that is incompatible with liking your fellow Europeans. Au contraire..

The battle we deplorables, we the 17.4 million, fight is not with other plebs, others outside the rich elites, elsewhere in Europe.  The Maillot Jaunes in France, those who voted overwhelmingly Oxi in Greece are those we agree with. Our common enemy are the autocratic elites, the political and media classes, across Europe who take our proud individual nations in a direction which we reject.

I live for part of the year, not enough, in the Mani, a poor but proud region of Greece. My friends and neighbours here know my views on Brexit, for I do not hide them. This was the part of Greece that was the first to raise the flag of revolt 197 years ago against another oppressive empire, that of Turkey. On March 17 1821 the Bishop of Tripoli called for Greeks to rise up and expel the Turks. Four days later the men of the Mani stormed the Turkish garrison at Kalamata and slaughtered every man there. That was the first action of a war for freedom.

The EU has brought misery and poverty to this part of the world. Folks here have a lot more time for someone with my views than with some millionaire ponce from the London liberal elite who insists that everyone who wants freedom for his country must hate folks from other countries.

Such folks should not sneer at me but should try coming to my home village of Kambos and explaining to my hard working, God fearing, gun owning neighbours just why the EU has made their lives better and why anyone who wants out must be a xenophobe. Go on Mr Metropolitan elitist… I dare you. 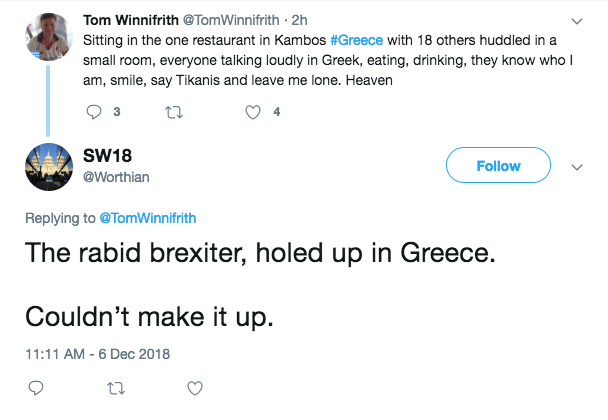