Led by Megan Rapinoe, a Trump hating lesbian who takes a knee to insult the National Flag and anthem, the US Women’s soccer team are naturally darlings of the liberal left, the sort of London elitists who write for the Guardian. When Rapinoe makes statements like you have to have gay players to win, which are patently untrue and ludicrous, Guardianistas rush to praise Queen Megan even more. Today’s peak wankerdom comes from sports writer Martin Pengelly who says, as you can see below, that he wants America to win and our brave girls to lose.

His reasoning is tortured but seems partly driven by the idea that the US can dump its head of state whereas we cannot. But were the US team led by a Trump supporting devout Christian from the Rebel South, who had spoken in support of the second amendment, was vehemently pro Life or who had expressed her distaste at how Elizabeth “Pocohontas” Warren had deprived real Native Americans of the benefits of affirmative action, I doubt very much whether English born and bred Pengelly would be cheering against his national side.

Is this peak wankerdom at the Guardian? It should be but with so many other idiotic columnists on the roster, somehow I doubt it. 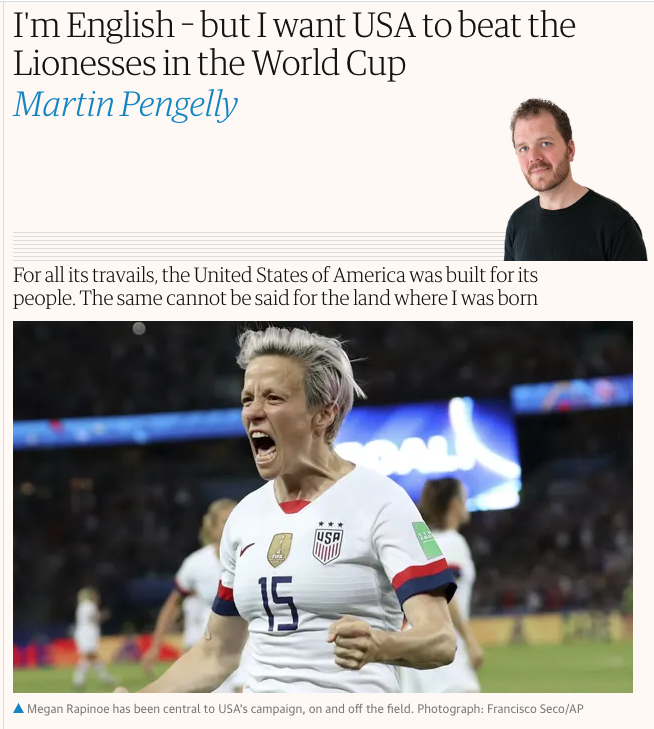