The NHS says we will not run out of drugs but why let the facts get in the way of a good tweet. It is hard when you are suffering from Brexit Derangement Syndrome like Lib Dem MEP Irina von Wiese. Pity poor Irina as she is ill with severe BDS, but she reckons we are all going to die! 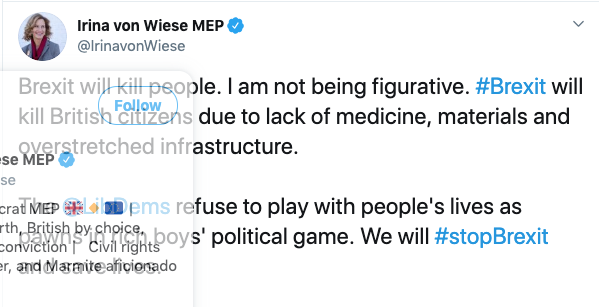 It was very late, nearly eleven at night, and very dark but a large mammal was moving off the  badly lit road ahead of me to my right and off into the fields. I was two or three miles outside Whitchurch in Shropshire, heading back to the Welsh Hovel and I swear that the animal was bouncing along like a Kangaroo or Wallaby. I am convinced that it was the latter.