Bright and early, notwithstanding another alcohol fuelled supper the night before at Miranda’s, the team of four assembled for Sunday’s harvest. Heroic K was resplendent in his red overalls and new boy T2 wore blue overalls which, he insisted, were on their last outing. T1 wore the sort of short long trousers of a length I’d associate with the Hitler Youth, which prompted me to observe that the snakes were probably all asleep so he was not that vulnerable to a bite. It turns out that T1 was terrified of snakes.

We were now working as a team. K leapt into trees like an Albanian cutting branches for the rest of us to thrash while K was the main twerker although we all had a go.  Mats were emptied into sacks to head back to the sieving machine and moved swiftly on as we headed towards the far reaches of the top level.  The terraces on either side are trickier and were being saved to last.

By lunchtime we had added another two bags and headed to Eleni’s Kourounis taverna for lunch. We had, the previous night made arrangements to get the olives down to the press. My little hire car really struggled when I had even two passengers to make it up snake hill without a bump or a groan as it went in and out of a pothole. Taking down more than two 50kg sacks at any one time would have been an ask. Luckily Nicho the Communist and Vangelis said they could help, Nicho noting “do not worry you have friends here.” As my daughter Olaf remarked last summer, this is something of a contrast with my life in Britain and is probably explained by the language barrier.

And thus at the end of a day when we had reached thirteen and a half sacks, K tield each one up with twine, and we somehow carried them, two men per sack to the front of the house as you can see below. Sure enough at 4 PM Greek Time ( that is to say almost five) Nicho emerged with his battered pick up and T1 and K lifted the sacks onto the truck. Nicho explained that he had a bad back and so, by that time, did I.  The truck headed off to the press where Nicho said he’d take care of everything and we retired for showers ahead of another evening at Miranda’s.

13.5 sacks left us 5 short of the 2018 total which involved Albanians. That was the first target with three days to go. Over dinner (a choice of hunks of meat and potatoes or nothing) we plotted where to go next for the best yielding trees. T2 said that his wife had wanted to come, he had really enjoyed his first day and so maybe they would both come next year. Wait till you wake up with aching joints tomorrow, thought I 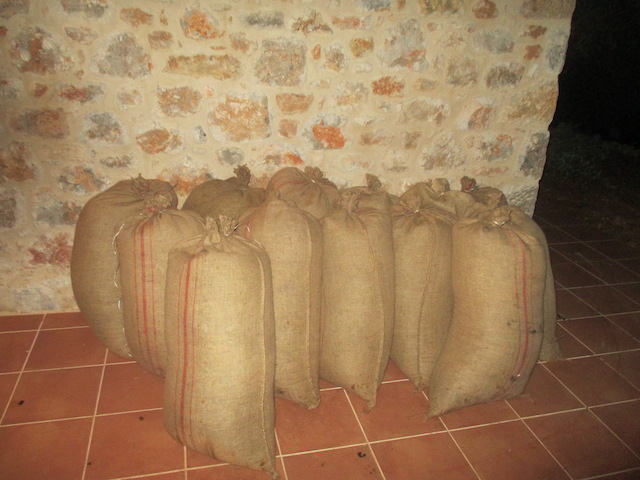