When, in a post Covid 19 world, our political leaders look for a new way to squander taxpayers cash, one inevitable option will be a public enquiry into what happened. Since the entire political & media class agreed on almost everything and will never admit they were blundering idiots in thrall to Prof Pantsdown it seems a pointless way of burning my hard earned cash but then when did that stop our leaders? If there is an enquiry I do hope it looks at the cretinous buffoons who are meant to be in charge of the rain sodden second world nation where I live, that is to say Wales.

What on earth did the Welsh do to deserve home rule by folks with the intelligence of a wasp with learning difficulties? Our first Minister, Mark something or other, looks like a traffic warden suddenly realising that he has been tasked with running a whole country. His health minister is the token person of colour in the Government and thus cannot be attacked for being the most useless man on this planet. He promised 15,000 tests a day by mid April. last week we hit 2,000. That is a bit of a failure, no? Vast sums were spent building overspill hospitals across sthe land, all of which lie unused. At the Government level it is spend, spend, spend with absolutely no effect.

How about my three year son takes over as health minister? He is also a person of colour so quotas would be maintained but he cannot be as hopeless as the present incumbent. And with Welsh schools set to be closed until 2028 in response to the demands of the bedwetting teachers unions, it is not as if Joshua has anything better to do.

Meanwhile as if the economy was nit totally screwed already we are told that, here in Wales, lockdiown must continue. In England lucky folks are now allowed to travel more than five miles to sit on a park bench without Plod coming along to hand out a spot fine. But, here in Wales, lockdown must continue until the entire nation is on welfare with every business driven to the wall and every citizen left housebound and in despair. And it is not just we in Wales. If any of you wicked English folks try to cross the border to take a walk here, Plod is under orders to nick you on the spot.

The border runs through my garden and fields here at the Welsh Hovel. If I spot any English folks trying to cross the river Dee seeking political asylum from Evil Tory England and seeking the safety of a land in lockdown and with minimal alcohol pricing,  I shall – as a law abiding citizen – order my cats to attack them ferociously and without warning.  English people you have been warned.

Meanwhile as I prepare for the one daily walk that I am allowed I am delighted to see that a new monopoly set has been launched for a nation under house arrest. 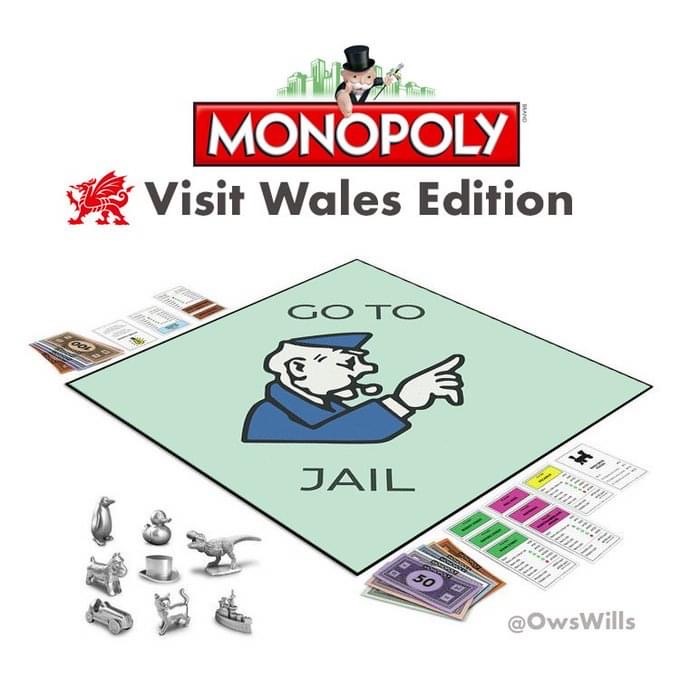