Ben & Jerry’s is now owned by Anglo Dutch conglomerate Unilever PLC but that is not stopping it engaging it A grade arsehole virtue signalling as it says BlackLivesMatter. There is also a nauseating stench of hypocrisy.

Unilever was formed as a result of a pre-war merger of a Dutch margarine company and British soap maker Lever Brothers. The latter sourced its palm oil from the Belgian Congo and in 1911 established a wholly owned subsidiary Huileries du Congo Belge. It used forced labour, palm cutters failing to meet requirements regarding compulsory cultivation of crops were liable to prison sentences, where the chicotte, a type of whip, was used. Did I mention that these folks treated worse than many slaves in Dixie were … er … black.

So Unilever’s track record in terms of showing that Black Lives matter is not exactly perfect unless,that is, it thinks folks in Africa don’t count. Perhaps that is why it is trying so hard to virtue signal in support of Black Lives matter as you can see below. 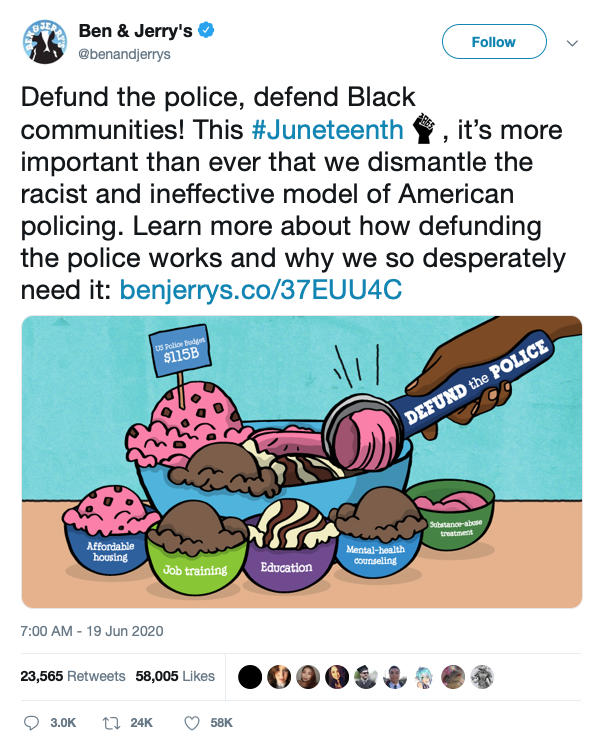 But is defunding the Police really going to help black folks in the USA or indeed anywhere? Most crime in America occurs in the inner cities, which are largely black neighbourhoods, and thus blacks, c14% of the population, are far more likely to be victims of crime than whites.

There were a total of 17.3 million emergency department visits or hospitalizations for non-fatal assaults in the United States in the 10-year period between 2007–2016. For non-fatal assaults with recorded race, 6.5 million victims were white non-Hispanic, 4.3 million black, 2.3 million Hispanic and 0.4 million other (non-Hispanic) and for 3.8 million, the race was not recorded. There were a total of 603,000 emergency department visits in the US for non-fatal firearm assaults in the 10-year period between 2007–2016. For non-fatal firearm assaults with recorded race, 77,000 victims were white non-Hispanic, 261,000 were black and 94,000 were Hispanic,

You get the drift… blacks suffer far more from violent crime in the US than they should. Last year just nine unarmed blacks were killed by cops. Cops are not the problem here they are the best hope black folk in America, or indeed in the UK, have of leading a life not plagued, or ended by, crime.

Yet Ben & Jerry’s goes with the woke mob and wishes to compound the pain its owners inflicted on black forced labourers in Africa with pain on millions of law-abiding black folks living in inner city America today.

Take your pick of why to do it but: