In the period January 1 to June 4, there were around 160 million interactions between US cops and US citizens. That resulted in 429 citizens being shot by the Police of whom 88 were black. Blacks were over-represented in this category but they are also disproportionately represented both in terms of victims of violent crime but also perps. This is not exactly genocide as some in BlackLivesMatter claim. Yet some in the media do not view it this way. Meet Holly Baxter of a failing British Deadwood Press turned, as a result of crashing sales, internet-only rag The Independent.

Holly claims that there is now no such thing as a good US cop. Not even the 150 or so who die in the line of duty each year. Not even black cops. Yes, I know that the BBC and most of the MSM likes to tell you that nearly all American cops are white part-time members of the KKK, but in most big cities the police departments are very multiracial indeed. In LA, for instance, just 35% of cops are white.  But heck what does it matter about that sort of thing? Holly and the Indy reckon ALL cops are bad.

This is part of the defund the Police narrative I examined earlier with regard to The Metro publication. The casual way that well-paid journalists attack the Police really does show just how out of touch the mainstream media has become, which is the main reason its audience is declining so rapidly.

As a journalist, it saddens me the way the phrase #scummedia is so widely used on twitter. But it is, I am afraid, increasingly justified.

As someone who lived in New York in the bad old days, I can never view cops with such hostility. I remember the crack dealers openly touting their wares at my local subway stop (Grand Army Plaza) in the days when Prospect Heights, Brooklyn was an edgy and pretty black district, not Islington, NY. I remember how the folks I lived with were held up at gunpoint, walking back from the LIRR stop at Atlantic Ave.  I remember being warned not to walk in Prospect Park without the dogs, as folks were regularly mugged or even murdered there. Those were the bad old days of the 1980s. Defund or undermine the cops and you will see it all over again. 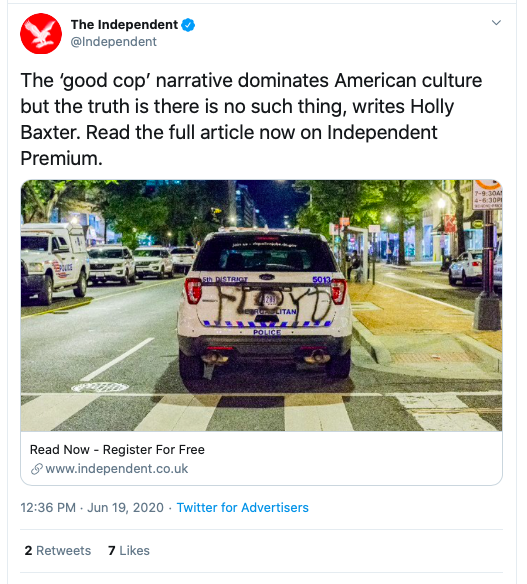