The Reading attack, Faima Bakar, The Metro and why we more and more despise the deadwood press

Some tweets do not age well. This gem below is from Ms Faima Bakar, a journalist on the tawdry free publication The Metro, and it came out on Thursday of last week. Events in Reading, on Saturday, will surely make even more folks who reflect on Ms Bakar’s work despise the dying, deadwood press and its out of touch, intolerant, liberal, elitist values.

Faima, it seems, spent two weeks talking to a variety of folks engaged in the Not for Profit part of society about how we should abolish the Police, a central call of the Black Lives Matter movement. I noted yesterday stats from the US showing how those who would suffer most from such an act would be the black community itself and, sadly, UK stats are not that different. 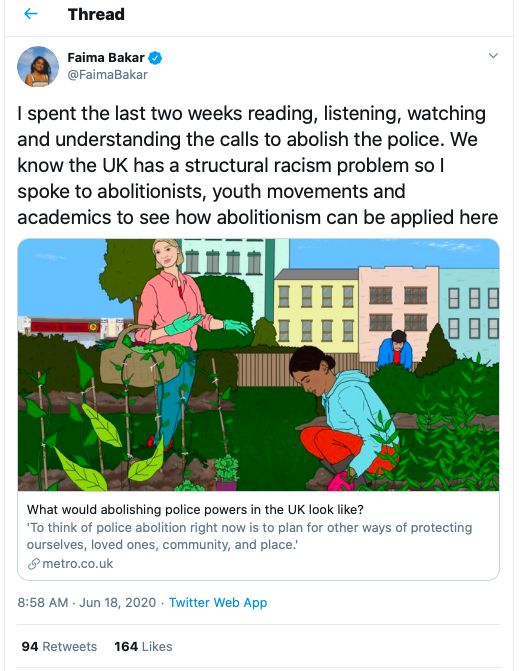 You might note that Faima chatted to a rather unrepresentative section of society as to the way forward. 85% of us work in the private sector. But Faima only talked to those who live off the taxes we “in trade” generate. I understand we tradespeople may challenge the views of those in the bubble but for balanced coverage shouldn’t Faima have held her nose and chatted to a few of us?

No doubt in spending two weeks to research her anti Police thesis Ms Bakar thought she was doing useful work and her editors seem to value her views. Meanwhile in Reading yesterday a crazed knife-man went on the rampage stabbing twelve innocent folks, three of whom have, sadly, died. He was only stopped when an unarmed cop ran towards danger, as others ran away from it, and tackled the assailant. Remind you of anything? The way the armed killers on London and Westminster Bridges were stopped perhaps?

I am not always fan of the Police. As a body it has shown itself to be heavy handed in tackling what are not really crimes and light handed when it comes to busting folks who do actually break the law.  The old Bill have done nothing to protect me, as a journalist, when my work in exposing fraud has exposed me to death threats. But the idea that we might scrap the Police is utterly insane and those who pursue that agenda have values which are alien to almost all of us.

Perhaps, as Ms Bakar sips an expensive expresso this morning served to her by a lowly paid waiter from Southern Europe; as she laughs with her chums inside an affluent London thought bubble she might ponder who has done a more useful job over the past two weeks: herself or some underpaid cop in Reading?

Of course, there will be no such reflection, no apology, no admission that she might have been wrong. Ms Bakar will continue pushing her views and the Metro will continue publishing them. You will see a similar anti-Police agenda being pushed elsewhere across the media. Of course, the deadwood press and those who work in it should be free to publish whatever they want, I would defend Ms Bakar’s right to publish her ill-researched nonsense to the last.

I see, in a recent survey, that only on five of us has read any news at all in a newspaper over the past week. In the real world fewer and fewer of us trust the mainstream media and, I say this with some sadness as a journalist, more and more folks despise the MSM. And that is why folks in the MSM and especially the deadwood press, will face an increasing wave of P45s.

Ms Bakar should carry on writing, but for her and her ilk the writing is already on the wall and in her spare time she should #Learntocode.