You may remember that last year, lovely Eleni’s Kourounis taverna and the place once called Miranda’s briefly had competition from the accursed creperie. It was seen off and as the days started to draw in, it closed, never to return to Kambos. But this year it is worse. Far worse.

As one looks up from the main square in Kambos towards the castle on the hill above the town, Eleni’s is on your right, Miranda’s, as I still know it, is behind you. That is the natural order of things.  The building on the left was once a garden centre where I bought my strimmer, sulphur to keep away the snakes, and other vital supplies. But the store moved over the road to where there was one an ouzeria and the building and the yard in front of it has remained dark.

But now not. For what was once the sulphur shop is now a restaurant serving, like Eleni, pizzas and crepes and Greek Food. Worse still, the owner is the grandson of the original Miranda so has local pull. As if the Covid restrictions and lack of foreigners was not enough, Eleni must now deal with this new upstart. And it gets worse…

Next to the new restaurant in what was once the creperie, there is now a patisserie serving all the sorts of sticky puddings that tempt me at Eleni’s. This is part of a chain already operating in Kalamata and Stoupa so has no local links but its presence is not what poor Eleni needs.

Our Guardian-reading friends L&J opine that having all four outlets might make Kambos a hub for folks from neighbouring villages. The square is now a destination. I am not so sure. The economy has again been hit for six by the Covid lockdown, there are far fewer foreigners in Greece this year, and I fear that all this does is to dilute the trade the existing venues had.

Eleni confides that she owns her place while other others pay rent. Moreover, Kourounis is more than a taverna. It is also a general store and grocer so has various income streams. It is where those of us in remote farmsteads pick up our mail.  It is a place to chat and gossip. Eleni will survive as the winter months draw in and those going out become fewer and fewer. I’m sure that come the olive harvest, those places that are normally busy with we stalwarts (Eleni’s and Miranda’s) will still be there. The other two… I am not so sure. I am doing my bit by ignoring the newcomers completely.

But meanwhile, on certain nights the square is packed with all three restaurants flourishing, though the patisserie has yet to find much traction. Tables are crammed together. There is no social distancing. Some waiters wear masks while others don’t. No-one in the square has a face nappy. Folks shake hands and touch each other. People laugh and smile. It is how life should be and it is what makes life worth living as a social animal. I contrast this with life in austere bedwetting Britain with a Government pumping out fear and people existing but not living.

The photos below are taken from the front of two rows of tables at Miranda’s and are in order: the patisseries, the new restaurant, the Kourounis taverna, and Miranda’s where the owner continues to wear a mask but shakes my hand every night. 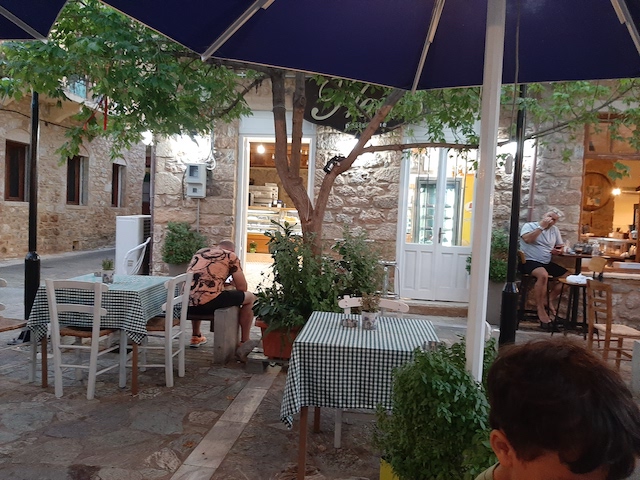 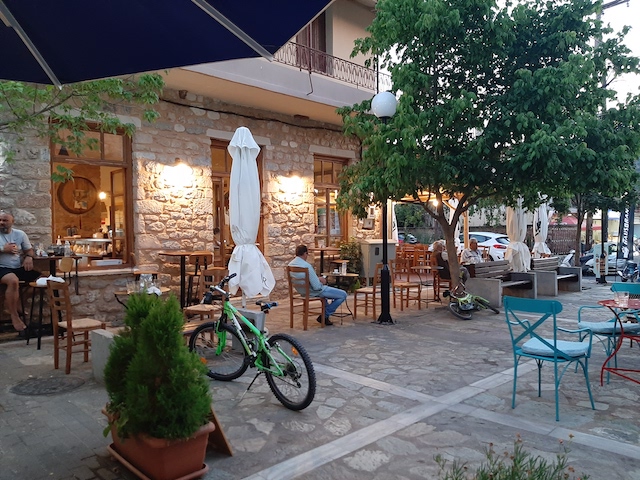 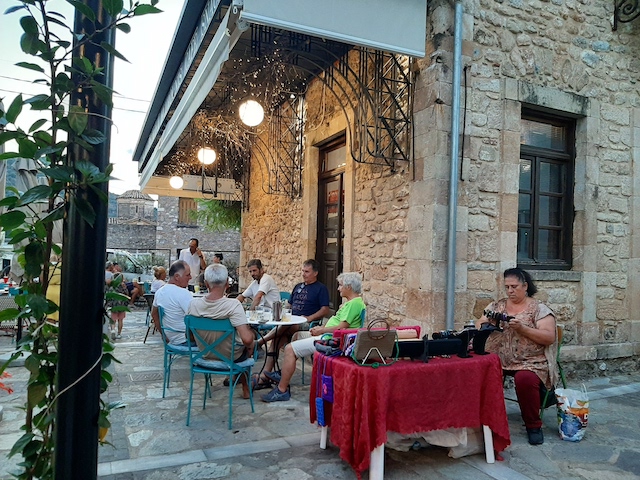 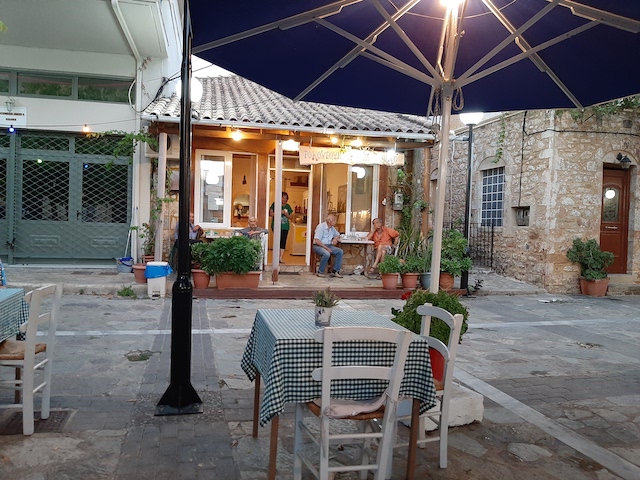