United with Big Nose as mask rebels but surely she is (w) Rik? More and more of us are becoming (w) Rik 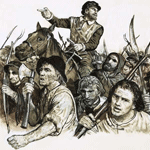 Big Nose and our daughter Olaf are on the train to her mother in West Wales and I am on the phone to the latter. She has a medical exemption and is a proud non-mask wearer. We agree that it is rubbish. Her mother shouts over that she is also a rebel. This top City lawyer goes round M&S not only not wearing a mask but also heading the wrong way on the social distance arrows trail.

“Webel” I shout and start doing my impression of Rik Mayall in the Young Ones. This is rather lost on Olaf. But as a reminder… watch to the end.

But Big Nose is not the only rebel. Travelling across England yesterday, I entered three petrol station shops with Joshua and on both occasions defied the signs. The staff do not wear masks and I sense they see how ridiculous it all is. Over the border today to drop off my car for its MOT, I walked back past the pharmacy. I stuck my unmasked head round the door to ask for a repeat scrip. The pharmacist himself is now not wearing a mask and with no-one else in the shop, he beckoned me in despite the signs outside.

Olaf says that her college bar in Oxford will be closed when she returns. I ask that if this is because without her nightly custom it has gone bust? She is not amused; she adds that the JCR will also be closed but that in student towns across the UK, folks are just having house parties instead. No masks. No social distancing. Life goes on. My faith in the snowflake generation is, marginally, restored.

Meanwhile, as I passed through Birmingham, the leader of the council, a clearly power-mad grubby little man called Ian Ward, was explaining on all radio stations how his authority working with the Old Bill was embracing new power it had asked for and been given by the Government to close pubs, restaurants, parks and more or less anything it wanted. This was to stop the City having to go into lockdown to stop cases rising dangerously. As it happens, they are falling in Birmingham from 30 per 100,000 a week ago (positive tests on a rolling seven day basis) to 22.  That means 242 folks have tested positive in Birmingham in the last week. On a death rate of sub 1%, that will see 1 person die in a City of 1.1 million.

Yet Ward and the sycophantic radio presenters on all channels regarded this as vital work. No one on the mainstream media dares point out the sheer lunacy of it all. Little men like Ward love their new powers while the MSM, which should hold our leaders to account, does nothing.

Of course, not that even one sad journalist challenges Ward, but there is no evidence that the infection rate is 22 this week or was 30 last week. Discredited Public Health England just records the number of positive tests and divides by the population to get a number.  There are almost certainly vast numbers of folks who are asymptomatic or who have mild symptoms and who are not getting tested and who won’t get seriously sick. If you do more testing – as the Government and Birmingham Council now plan to do – you will detect more of them. You will not establish any sort of trend as this is all about the number of tests done. But finding more cases will justify the daft mask and social distancing rules and shutting down more pubs and parks. The threat of a “second wave” will be used by an entire political and media class to justify the Government’s economy and life-wrecking response to Covid which they all supported.

But slowly the population is waking up to this and more and more folks are joining myself and Big Nose and becoming “webels”.