This is the difference between we on the right and the new left when it comes to free speech. When one of us says something the left do not like, they form a flash mob and try to get the sinner booted of twitter or youtube, they try to ruin his/her career, and the Marxist Madrassas students and lecturers unite to no platform the miscreant who is denounced. His or her opinion is silenced and his or her career may be ruined without any debate on what he or she actually said. We on the right want our opponents to enjoy free speech, not only because we hope, in vain, for the same for ourselves but also because we are confident that in a free debate, the folly and in some cases sheer toxicity of their views will be exposed. Meet Sasha Johnson, a leading member of BlackLivesMatter in the UK.

Sasha is from Oxford and has been all over the news in recent weeks as a spokesperson for BLM. Yesterday she sent out the tweet below. It is hateful and loathsome. I write as someone who has just climbed out of a marital bed with a woman of colour. Love, not hate, is what will make the world a better place. That is the world I want for my mixed race children. Surely that is what we all want?

As I have noted before, we can all support the statement that Black Lives Matter and indeed should support it, but the organisation of that name has some appalling policies and appears to have attracted some hate filled and unpleasant individuals to its ranks and senior positions. Because those policies were not widely discussed from the getgo, organisations such as the BBC and the Premier League waded in to support the organisation without being challenged on the madness they were supporting. Do you really want to defund the police, close the jails and destroy capitalism?

Twitter responded, as you can see below, by banning Sasha. I hope that it rescinds that decision. Not because I agree with everything she says but precisely becuase I disagree and because what she says is often so offensive.

Expose her hate and she will be discredited. Try to silence Sasha and, to her supporters, she will be a martyr and the wider world will remain ignorant of the true nature of the BLM movement. That would be regrettable. 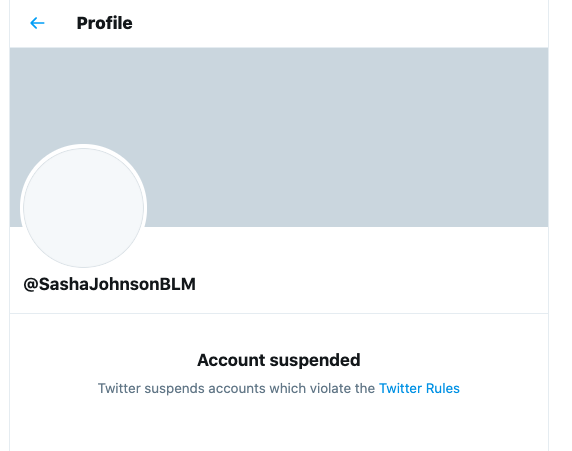