The sad decline of Oxford University: woke Dr Jennifer Cassidy on The US Constitution

As each day goes by, there seems another sign that the University in the City of lost causes is, itself, becoming more of a lost cause. Meet Dr Jennifer Cassidy. You can hire her as a speaker if you have an appetite for expensive woke nonsense and her agency says of her:

Dr. Jennifer A. Cassidy is a Departmental Lecturer in Global Governance and Diplomacy at the University of Oxford, where she lectures on Diplomacy, International Law, Digital Diplomacy, and Women in Leadership. Her PhD from the University of Oxford focused on the unique and changing relationship between social media and foreign policy. With a specific focus on the evolving nature of digital diplomatic signalling and online strategic narrative during times of political crisis. On her twitter feed, she claims to be a politics lecturer at Oxford University.

Natch, being in the public sector and thus at no risk of job loss, she has plenty of time to tweet her great thoughts on twitter. Here is her take on replacing Justice Ginsburg in the Supreme Court. 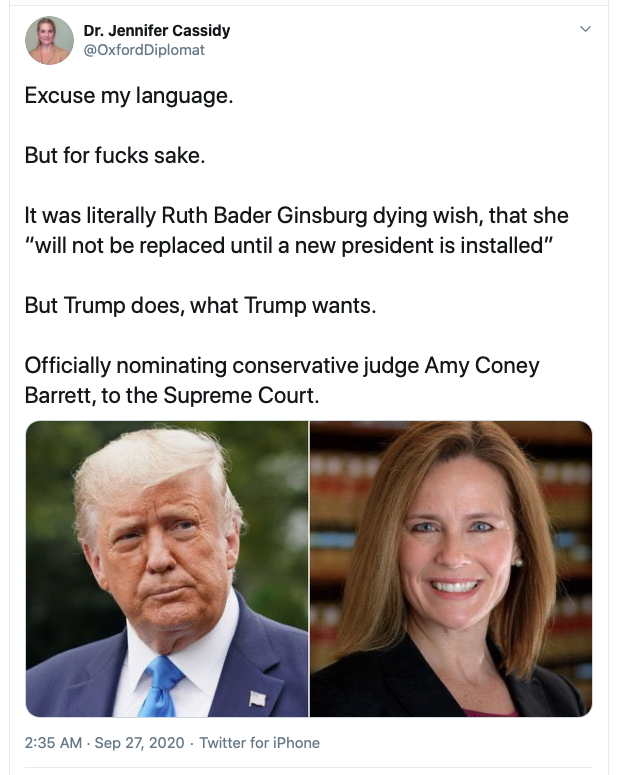 Yes, the Constitution is clear: as I noted a few days ago, the sitting President nominates Supreme Court Justices and the sitting Senate ratifies whether it is an election year or not. In my day at Oxford, a Don who suggested that the Constitution be ripped up on the basis of a dying wish of one Supreme Court justice would have been laughed at. That is just not how the Constitution works. But these days, it seems as if Oxford promotes the ignorant as long as they are woke enough.

It seems that those who wish to shed the Constitution have a new battering ram with which to destroy 250 years of law. That is to say an opinion poll out last night showing that 56% of Americans agree that it should be the next President, not this one, who makes the nomination, meaning that with a possibly disputed election you have a court of eight which might not be able to make a clear adjudication. Folks have not thought this through.

But Cassidy should know better than most that basing policy on opinion polls is a dangerous thing. Had that been the case in 1860, there would have been no US Civil War and no freeing of the slaves. Almost certainly, an America led by polls would not have entered World War One. That, probably, would not have changed the result but it would have seriously prolonged the war. Basing decisions on polls would almost certainly have meant no Roe vs Wade. I’d have no problem with that since I deem murdering a foetus wrong but would those who say we must follow the polls really want no legal abortions in the USA? Civil Rights legislation would have been delayed if America had listened to the polls and there would be many, many more folks heading to death row.

Is all this really desirable? Or is it just this one poll that the liberals want us to pay heed to?