As the BBC, the Met Office and others bang on about man made global warming, they always cite the “experts” and their “expert predictions”. It has now been 32 years since the first experts warned that the Maldives at c 1yard above sea level would be submerged. So perhaps, if it is not an inconvenient truth, it is worth revisiting that one.

It was in September 1988 that the United Nations first warned us that the Maldive Islands of the Indian Ocean would be submerged by rising sea levels in less than three decades. No fear not, there is no need to cancel your Christmas break. The media lapped up the UN warnings.

“An estimated rise of 20 to 30 centimeters in the next 20 to 40 years could be ‘catastrophic’ for most of the islands, which were no more than a metre above sea level,”

A year later, there was a Small States Conference on Sea Level Rise organised by the UN.  Shihab edited one paper by a James Titus – HERE – which is particularly alarming for one island.

“Thulhaadhoo.. With 1900 people, this island is less crowded than Male but more so than most islands in the Republic. It is probably the most vulnerable we visited. Most of the land is about 70 cm above high water, and reclaimed areas are only 35 cm above high water.”

Titus shared the view of the UN that folks on the islands would need to be resettled. Fear not, you can still book a holiday on Thulhaadhoo where life goes on unchanged.

Wind forward to 2007 and the IPCC predicted (notwithstanding 19 years of sea levels not increasing a jot) that they would rise by 23 inches by 2100 making most of the islands uninhabitable.

Wind forward to 2009 and it has now been twenty years but, with no evidence of sea levels increasing more than marginally since 1988, the alarmists are at it again. Republic of Maldives President Mohamed Nasheed addressed other world leaders at the UN General Assembly Summit on Climate Change in August 2009 to alarm attendees that entire populations across the world will drown as glaciers melt – and increase the ocean depth by just 4.5 feet – because of man made airborne pollution.

“You know that with a sea-level rise of over 1.5 meters, hundreds of millions of people would be dead,” Nasheed told the UN Chronicle days after speaking at the summit. “They would simply be wiped out.”

Natch the BBC and papers such as The Guardian were all over this. 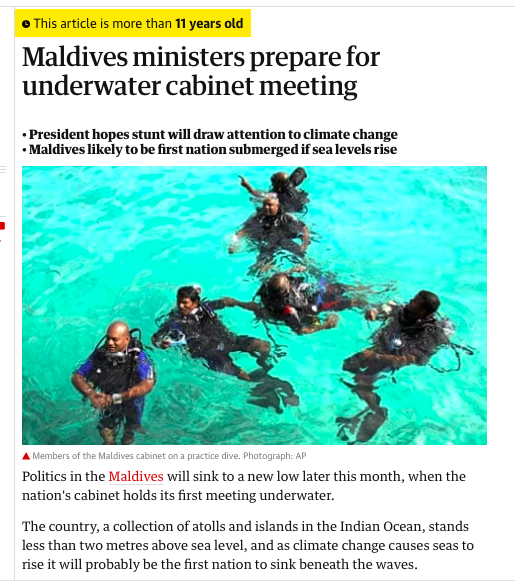 So how are we doing as we prepare to enter 2021?  The population has not had to be resettled on any of the islands. In fact, the Maldives population has increased sharply to 379,270 ( 2020 census) – up from 270,101 in 2000 and 100,883 in 1966. The land mass has not actually decreased at all.  In fact, one 2018 study by New Zealand scientists from the University of Auckland showed that it was actually increasing but that is the sort of thing the mainstream media opts not to report. The sea level is almost unchanged from where it was in 1988.

So what might we conclude from this? I would suggest that we can now happily state that the ”expert” predictions from the 1980s predicting disaster within 30 years were just complete hogwash.  What is stunning is that the same sort of people have continued to make predictions ever since and our leaders, egged on by an unthinking media, chuck trillions of dollars at fighting man made global warming to save the Maldives from drowning. Experts who should be laughed at are treated as highly credible.

It is rather like finding an expert who predicted hundreds of thousands of British deaths from Swine Flu, Avian Flu, MERS and SARS and getting him to produce projections and policy responses to Covid. No one would be that foolish, would they?