The least credible Britain bashing in the Guardian, from Arwa Mahdawi

I got a bit of grief about an article I wrote about the village in which I live on the basis that it covered what I felt had happened to me and what would happen to me here. But surely that is what writing is all about? If it is to be genuine and from the heart it is about what you actually experience. This brings me to Arwa Mahdawi writing the the Guardian about what a ghastly and hostile place Britain has become over the past year since Brexit. She is utterly entitled to that opinion though it is not one that, for instance, my wife, like Arwa, a British born person of colour (and fellow deluded lefty) would recognise. But there is something which differentiates the Mrs from Arwa…my wife actually lives here. Arwa lives in New York and admits to having not been back in old Blighty for more than a year.

And thus her perspective on Britain is entirely second hand. And, I suggest, that her sources are not going to be that diverse. Her friends and work colleagues will, i suspect be, like her, metropolitan, Brexit opposing, left leaning, well paid elitists. Her primary, or perhaps only, news sources are more likely to be her own paper and the BBC rather than say, the loathsome but not left leaning Daily Mail. Perhaps, like me, she strives to inform herself of what folks outside her biubble think. That is why I do hold my nose and try to read the Guardian now and again and, armed with a stiff brandy to keep me sane, managed a whole sitting of Newsnight last night. Heck I even speak to a sociology lecturer every day. that is to say the Mrs. Notwithstanding this, it is tough to escape your own echo chamber. My twitter following is generally of folks on the right as Ms Mahdawi’s will be of those on the left.

But at least when I write about life in the part of Britain in which I live it is based on first hand experience. To write a whole piece on how a country has gone to the dogs over the past year without one single first hand, boots on the ground, experience is surely just a bit shallow and pointless. But it feeds the Guardian narrative so its, dwindling, readership probably lapped it up anyway as an exercise in confirmation bias, however weak the original source.

Now how would a paper in New York like my thoughts on crime in Prospect Heights where I used to live. I still speak to a few friends there and watched a news report on Fox last night so surely that makes me qualified as an expert? 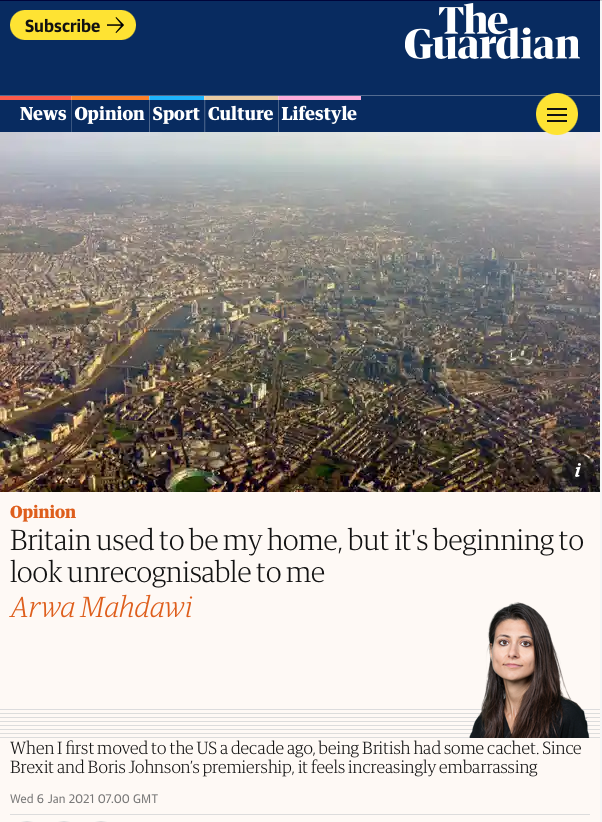