The BBC is today celebrating a milestone in a renaming process at Liverpool University. In response to student demands, the building, a hall of residence, is no longer named after William Ewart Gladstone. Instead, it is to be named after someone “linked to the theme of racial equality and Liverpool”. I cannot wait and nominate the late George Floyd who once listened to a Beatles LP. But, whether fed by the students or just ignorant in its own way, the BBC cannot help itself in lying about the grand old man of Liberal politics with two doses of fake news.

Gladstone’s crimes are, according to the BBC, twofold. He profited from slavery. Yes he did. His dad was a slave owner so made money from the plantations he bought and then was compensated by the Government, like all other slave owners, when the slaves were freed. But it is a bit harsh to judge a chap by the sins of his father. Where does this all end? I accept that having money from wealth built up partly from slaves helped Gladstone’s career. But the same could be said, for instance, of Liberal MPs Arthur and Henry Hobhouse and indeed of a woman who married into this wealthy family, Wera Hobhouse the Lib Dem MP for Bath and a campaigner against “dubious statues”. Where do we draw the line over where inherited guilt lies?

But the hanging offence which justifies the renaming is  “Gladstone spoke out against abolition in Parliament because his family had slaves on plantations in the 1800s” and again he “used his maiden speech in the House of Commons to support his father’s interests, arguing against abolition.” Oh dear. That sounds bad. Except it is just not true. In the debate on the bill which abolished slavery, Gladstone spoke well and was commended by that great anti-slavery campaigner Robert Peel – who the fools in the Welsh Government think is a pro slavery man – for his speech which started with the admission that his father owned slaves.

Gladstone took the same line as he had in a debate at the Oxford Union, that slaves should be freed but should be educated and trained both in the Christian faith but also with practical skills first so that they could flourish away from the plantations. As a candidate in the 1832 election in Newark, as a Tory, he made his position clear that he wanted through the adoption of a universal system of Christian education and the inculcation of “honest and industrious habits. Then ‘with the utmost speed that prudence will permit, we shall arrive at that exceedingly desired consummation, the utter extinction of slavery.”

In 1833, Gladstone did not vote against the abolition of slavery as the BBC insists and, no doubt many students think, he voted for it. As an older man, in 1893, he admits that his position, that of a gradual emancipation so ex slaves would be able to cope in the wider world, could have been better but again he makes his position clear “the advance of social opinion generally on that dreadful subject has been immense”.

Okay Gladstone’s record is not unblemished but what the BBC reports and the students claim is just untrue. As well as voting to abolish slavery, we should credit Gladstone with widening the franchise, extending home rule to Ireland and a raft of social measures designed to ease the plight of the poor. He supported the abolition of the Corn Laws which were causing starvation throughout Britain and Ireland.  Is he really such a bad man?

Oh well, who cares about all the good Gladstone did, let’s just lie to say that he voted to continue the slave trade and get on with renaming the building at Liverpool’s Marxist madrassa after George Floyd and be done with it. Once again we remember the words of George Orwell in 1984:

“Every record has been destroyed or falsified, every book rewritten, every picture has been repainted, every statue and street building has been renamed, every date has been altered.  History has stopped.” 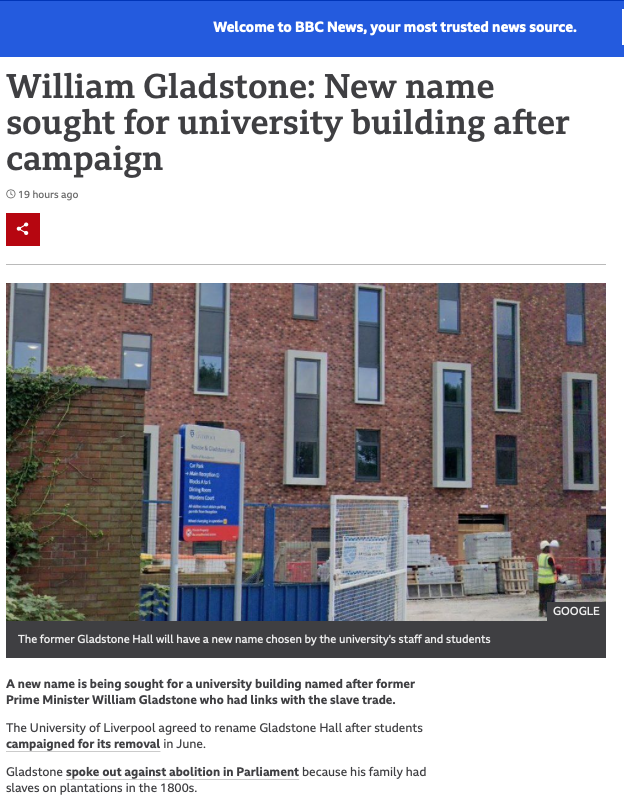