Power corrupts and absolute power corrupts absolutely. In Scotland, the SNP has had absolute power for too long and has thus expanded its hegemony from the political sphere to a capture of the Civil Service and the corrupt MSM but most noticeably the BBC. You want evidence of this? Take the page from the BBC website below.

Tory MP David Davis used Parliamentary privilege to read out a raft of emails from whistleblowers showing very strongly that Nicola Sturgeon has lied to MSPs, the Media and an enquiry into the allegations about fitting up Alex Salmond on false sexual harassment charges. The emails were damning.  As of course was Salmond’s testimony to that enquiry.

Ms Sturgeon’s minions in the Scottish Crown Office have spent the past 24 hours sending threatening legal letters to The Spectator and the Guido Fawkes website demanding that they unpublish Salmond’s testimony which is already in redacted form to prevent the names of his accusers being known. The Scottish media are so corrupt they needed no bullying and never published in the first place.  This is not about protecting anyone but Nicola Sturgeon and her cronies, it is about ensuring folks do not know what went on.

So how does the corrupt BBC cover Davis and his amazing emails? Firstly it does not use a photo of him speaking with the emails but instead a very old one of him chatting to Alex Salmond three and a half years ago. The implication: Davis is Salmond’s pal, his poodle. Davis is very much his own man. That is a smear.

Then the headline is not about what Davis said which is explosive but that Jimmy Krankie “refutes claims about Alex Salmond row.” The emails were not about the row but about the stitch up of Mr Salmond and it is a deceit to pretend otherwise. Refute can mean disprove and many will take it to mean that. But it also means to deny. That is why when I expose a fraudulent PLC, its PR folks always rush out a statement saying that the company “refutes” my claims. Folks think it means disprove but it actually means deny which is very different. Ms Sturgeon used the word refute because she knows she cannot use the word disprove. What Davis read out was not a claim but a fact, a real email.

Proper journalists would have called Ms Sturgeon out on this, particularly when they see her minions trying to crush press freedom at The Spectator and at Guido Fawkes. But in Scotland, the BBC long ago since stopped even pretending to be being proper journalists as opposed to mouthpieces for the SNP PR spinners. 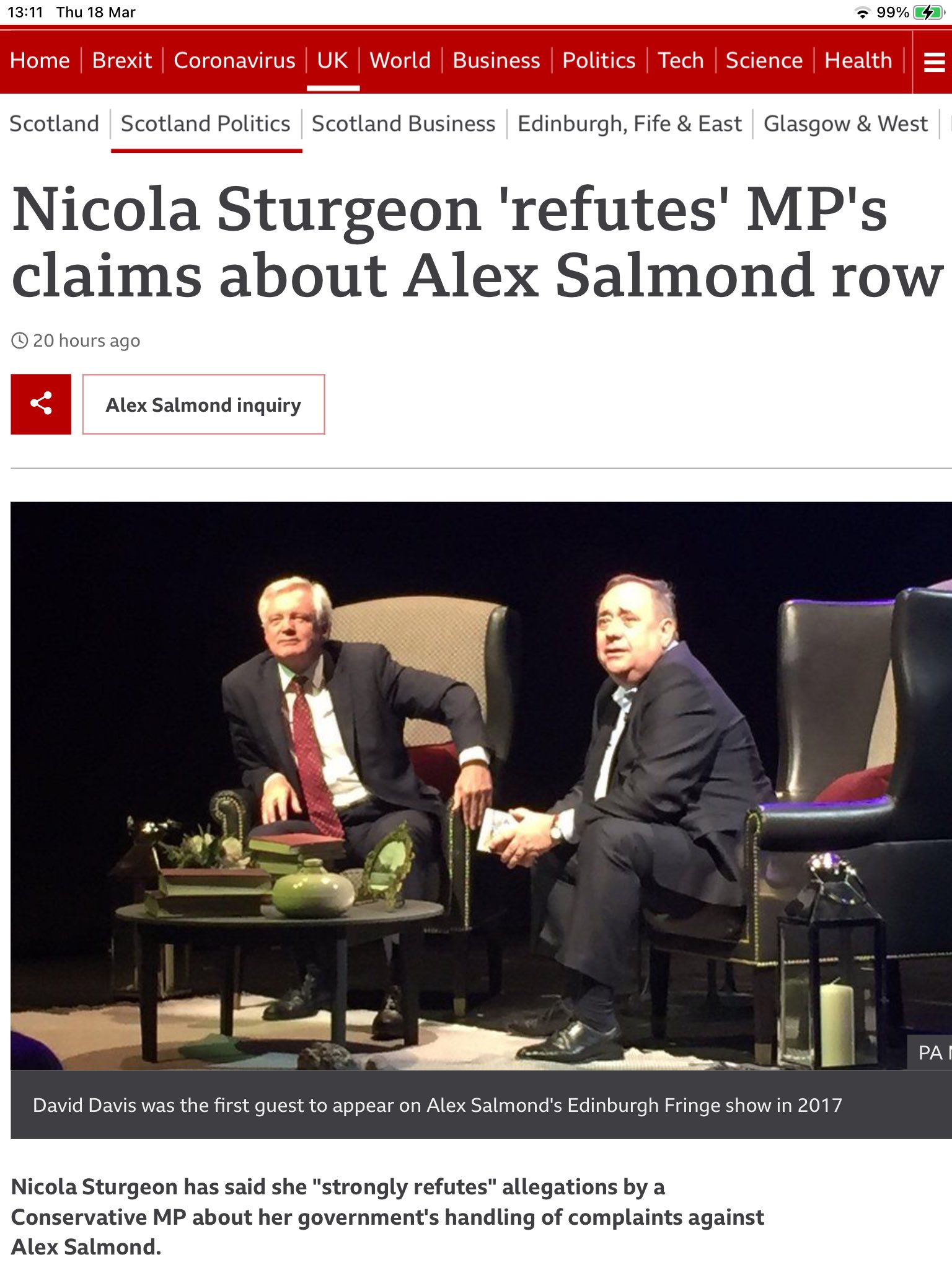