As I continue to work on reclaiming the fields around the Welsh Hovel, the list of buried horrors grows. I have already spent almost £5,000 clearing this place of asbestos in barns, in sheds and where I have found it buried by the previous owner in various places. I am almost there. But now to the tyres and to the folly of Wrexham Council and every other local authority in Britain.

In clearing the land behind the barns HERE, I shall expose a stunning rock face to the world as well as building an elevated mound, ending with a Ha Ha, to keep back the floodwaters and so protect the listed barns. But that red sandstone rock face is right now covered with so much detritus: scrap iron which is set to fill a second skip this week, old wood, some more asbestos and about 200-250 old car tyres. They were just dumped there.

The local council says that you can deposit tyres at the recycling centre just a few miles away so I took eight along last week and politely enquired of a young man if I could bring many more along another day. He said he did not know. So I started to unload my tyres in the relevant bin only to have an older man with one of those scrunched up faces contorted with years of rage come and scream at me “only 4 tyres”. I asked what I was meant to do about the other 200 on my farm. “That’s commercial, that is – you can’t bring them here” said the man who obviously got a real kick of being a total bastard. But my tyres are not commercial. I own the house and discovered them buried under a stack of other things. The man would not budge. So what to do?

I could bury a good number under the mound I am creating. That is both environmentally unsound and also illegal. And I am a rare case in having such an opportunity. I could also systematically fly-tip them. Or I could pay £1.70 a pop to have them removed legally by a chap who will clean them up and turn them into soft areas around play equipment for kids. Being a law-abiding citizen, I am going for option three. But many folks will think that this is £350-450 down the pan and would go for options one or two.

I will stick to the law, get out my chequebook and help to make this place even more beautiful to view for those walking along the River Dee. I am, in every respect, a model citizen and an asset to the community.

Wrexham like other local authorities yaks on ad nauseam about the evils of fly-tipping.  I agree that it is a scourge. But when – despite charging me a frigging fortune in domestic rates – it makes it impossible or prohibitively expensive to clear and restore my barns and fields, it encourages me to fly-tip or bury waste.  Patently, my tyres are not commercial waste, this is domestic waste. Yet in enforcing such rules with such little flexibility, it encourages me to break the law.

Luckily I am a law-abiding citizen. But others are not. So rather than spending a fortune advertising about how evil fly-tipping is, and on enforcement, why doesn’t Wrexham simply look at its own rules which drive folks to fly-tip? 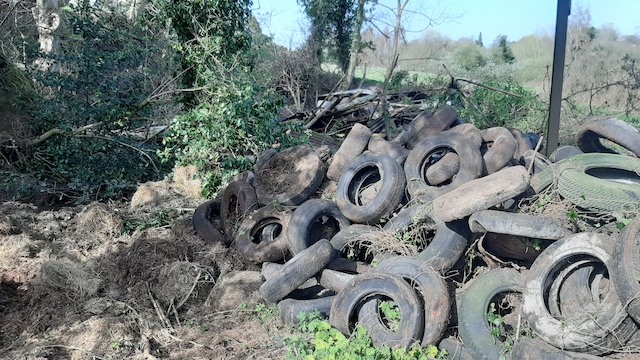