Though most folks were not masked and though Kambos is not a tourist village and there had not been any covid cases for miles bar one German about ten miles away, and we all know what my neighbours think about the Hun, the Covid crises had somewhat dulled the spirits of all. And thus what could be better than a party in the village square organised by my good friends Vangelis and Nicho the Communist to raise funds for their new youth club and to cheer everyone up. Being British we arrived early on that Friday evening. well, we thought eight o’clock was quite late but almost nobody was there so it was early.

The village square these days has restaurants on three sides including the Kourounis taverna of Lovely Eleni and the place that used to be called Miranda’s a long time ago. On the other side is the road from Kalamata to Kardamili which winds through the village and makes a 90 degree turn right in front of the square. In the good old days we all used to park our cars and bikes on that road so it was only a short stagger to get back inside in them after an evening’s heavy drinking. But, as it is awash with cash, the  Greek State decided to paint yellow lines all along this stretch of road. And worse still the cops do actually enforce the law now and again.

But tonight, right at the point at which the road turns, Nicho and Vangelis helped another man to assemble a music deck and loud music of a traditional nature started playing. Nicho and others wandered around trying to flog more tickets for the raffle to win either a drone or a large TV. Having sensed his disappointment at my earlier purchase I made a point of buying 20 Euro worth and told him that I wanted the TV.

The square was filling up as we ate our supper at Mirandas and by the time we took Joshua for an ice cream at Eleni’s at about ten it was packed. The music played, folks laughed, smiled, did not wear masks, slapped each other on the back and lived as humans should. No doubt mask jihadists back in Britain would regard this as reckless as they enjoyed more time locked inside and not speaking to anybody. Such folks might exist longer ( all the dat suggested they did not) but they were not living.

By 10.30, Joshua, his aging dad and six months pregnant mum were flagging and we patted a few folks on the shoulder, reminded Nicho about our meeting on Sunday, and headed off.

The next day we started packing, cleaning the hovel, swimming and kept pretty much to ourselves. We ventured into Kambos in the evening for a meal and it was clear that led by my friends folks had laughed, drunk, danced and eaten well into the night. When I think of Kambos villagers behaving in such a way my mind always turns to that little village in Gaul where Asterix and his pals do the same as a large bonfire burns, enjoying their freedom. Back in Britain, a place to which we would shortly return, they lived like those under Roman occupation in the rest of Gaul: no hugging, no contact, face masks, no fun, no life. 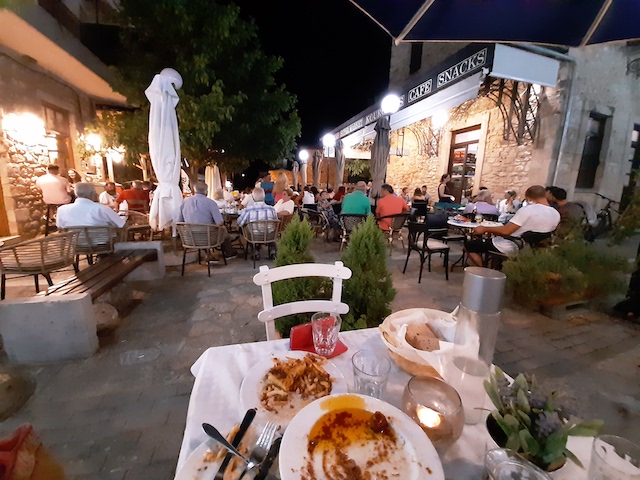