Kier Starmer is acting to purge some of the more extreme anti-semites from the Corbyn era from the Labour Party and that must be applauded. However, in his comments on events in Israel this week he sends out a clear dog whistle call to folks who hate Israel, many of whom do so because they hate the Jews. And that is one reason why, for many of us, Labour, a party where many of its foot soldiers snigger about those who respect the Union flag but put a Palestinian flag on their twitter account, remains beyond the pale.

Sir Kier tweets about events at the al-Asqa Mosque and says Israel must take steps to de-escalate tensions. Last night residents of Tel Aviv and Ashkelon slept in bomb shelters as Hamas sent hundreds of rockets from Gaza to kill Jews. It worked, five died including one child. Hamas was not targeting anything of military significance it was sending rockets into civilian areas to kill Jews. That Israel responded by targeting rocket launchers – which Hamas sites in civilian areas – is what you and I might term self-defence but folks like Kier term Israeli aggression.

The tweet below makes it clear that Starmer blames Israel for the current tensions and that the onus is on it to resolve them. I would have thought sending rockets to kill civilians breaches International law too but Sir Kier is a lawyer so he must know best. 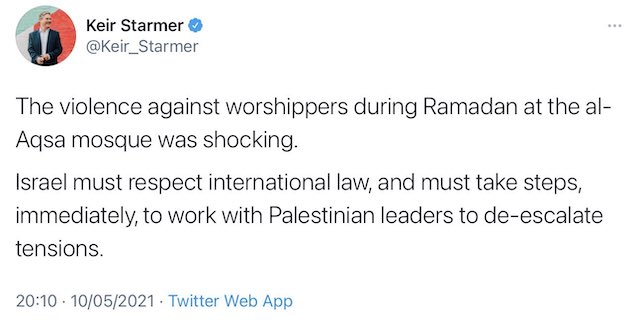 And for those who see the Palestinians as the victim in every event, it seems as good a time as any to, once again, bring you a wonderful song from 2010 from Caroline Glick and her team from Latma TV