Though he boasts of his East End heritage, my friend Lucian sometimes says, in his very posh English accent, that he is Scottish as his family has some estates up there funded, one suspects, from the slum housing they once owned in the West Ham heartlands. Lucian is about as Scottish as Rod Stewart or the late Duke of Edinburgh. But tonight he will be filming with a German TV crew in Glasgow.

Lucian is on a plane right now and is heading to Glasgow’s East End to the sort of Celtic supporting boozer where they sing moronic songs celebrating the blood soaked evil bastards in the IRA and where their two favourite teams are Scotland and anyone who is playing England.

Ignoring the fact that their grandfathers and great grandfathers gave their lives for Britain fighting the Bosch, these morons will be baying their support for the Krauts and Lucian will be among them. I would suggest that, with his posh English accent, Lucian restrict himself to just 3 phrases: “eine bier Danke”, then if anyone speaks to him “sprechen ze Deutsche”  and, after Germany win on penalties, “For you Gareth ze war is over”.  There is no chance of these Glaswegian goons actually speaking German. Most of them struggle with English. So I am sure Lucian’s bluff will not be called.

Meanwhile here in Greece, this entire nation will be rooting for their second team: anyone playing the fecking Krauts.

Postscript, Lucian sends me this image from the Den of Fenians who he reports were not best pleased by the result. 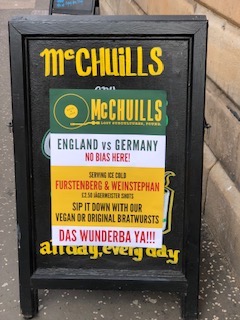