Photo Article from the Greek Hovel: a man diagnosed as Educationally Sub Normal at 4 teaches his 4-year-old about letters

Those who comment on my frequent typos may not be surprised to hear of this early diagnosis, prompted by the fact that my sister T – 15 months younger than me and a girly swot even at that stage – was more advanced in the reading department than her older brother. It was not until I was seven and interviewed by Jack Marshall the head of the Warwick Junior school that this cloud was lifted.

I seem to remember getting a number of questions wrong but Marshall, a war veteran and former Warwickshire cricketer, saw through that and recognised a hidden talent telling my parents that Warwick could unlock that talent.

Joshua has a stunning vocabulary and chatters non-stop and we have long conversations on matters including why God made wasps, goat breeding and what happens to any male goats we breed (the pot) as well as, obviously, dinosaurs. He picks up useful phrases all the time, the latest being “schoolboy error”. He has yet to pick up on a favourite from my bearcasts, “coke and hookers” but it is only a matter of time. When he does, eventually, repeat that to his mother, I shall recall how – at his age – I told the vicar at Great Barrow to “bugger off”, a phrase I had learned from my father.

Though his vocabulary is amazing, his reading is not that good. So we are patiently working through the alphabet, as you can see below. When he recognises a letter, his job is first to find a Mr Man whose name starts with that letter then to think of other words starting with that letter. So L is for Mr Lazy, for his Aunt who has a dog called basil (Lucy) and his sister who you know as Olaf but who he calls ‘Livia.

It is a hard slog but the aim is to have him reading quite a bit by the time he starts school in Wales in September. Then when his, white, teachers tell him as they now must do, that he is a victim and that all the other (white) kids in the class have privileges he can never have, he can tell them to bugger off. Or maybe just to say that is a “schoolboy error.” 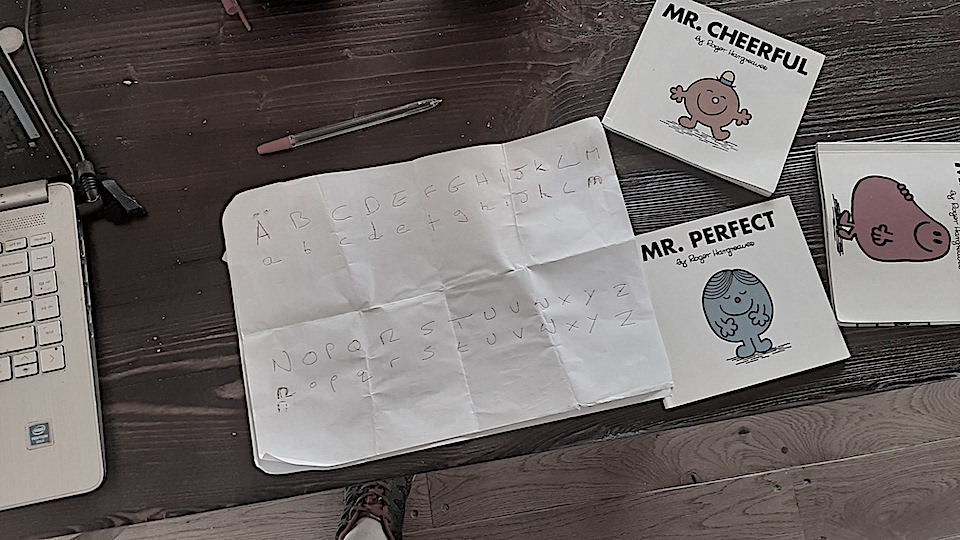