When is it okay to attack Jews? Ask lefty "journalist" Rivkah Brown of Novara Media

Many of you will have been shocked by the recent footage from London of a bus load of Jewish teenagers being abused and threatened as they went out to celebrate the first day of Chanukah.  Chants of Sieg Heil could be heard.  The BBC reported that at least one teenager shouted out something about a muslim, implying that they almost deserved it. As it happens what can be heard on the audio is the hebrew for “Call someone it is urgent”. Natch the BBC has yet to apologise for this vile smear.

Heck if my bus was surrounded by folks shouting, inter alia, Sieg Heil, I’d want to be rescued. But for some folks on the left such Jew hatred is okay. Meet Rivkah Brown of Novara Media.

Apparently since the “attackers” are people of colour anyone kicking up a fuss about this issue is clearly a racist. Whatever… Such is the Jew friendly face of the British left in 2021. 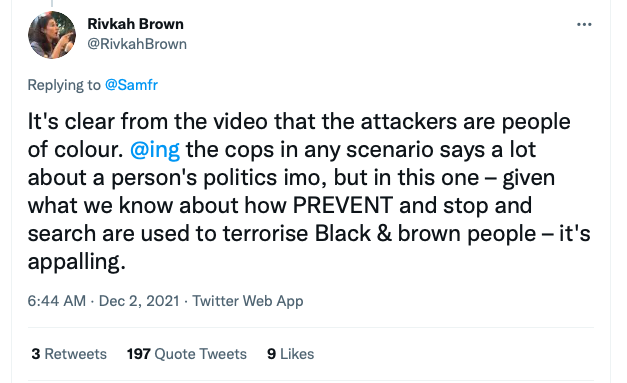