I think it might be an impending thrashing for the Democrats in the mid terms a week tomorrow which will see both the House and the Senate switch to the GOP., which has prompted the 5th wave of RDS among the media elite.There is certainly a new wave of the pandemic for which there is no known cure but which appears to be linked to long term exposure to the Guardian, CNN or the BBC.. I refer to #TrumpDerangementSyndrome. Poor ex BBC staffer Jon Sopel, has yet again gone down with the syndrome as you can see below. He blames an attack on the husband of House Speaker Nancy Pelosi on Donald Trump.The facts? They do not matter if like poor Jon you suffer from TDS.

The Police were called to the Pelosi household to find two men grappling in their underpants. The assailant had a hammer but did not arrive with it or arrive in his underpants. It is Mr Pelosi who is into hammering. There was no sign of a forced entry to the house. Or indeed to anything else. You may explain what happened in many ways, the Pelosi’s could release images from their CCTV cameras to show how the “assailant” looked to secure entry at the rear (of the house). They have not.

But for Jon, who appears to ignore the fact that the assailant lives in a house in San Francisco adorned with Black Lives Matter and Gay Pride banners so is not your typical MAGA sort of chap there is only one conclusion…

Join the dots and Trump is to blame. Whatever. I suggest we pray for poor Mr Sopel as this bout of #TrumpDerangementSyndrome seems to be his most severe yet. He is a sick puppy. Let’s pray for Jon who has never really recovered from being monstered by Trump back in 2017 HERE 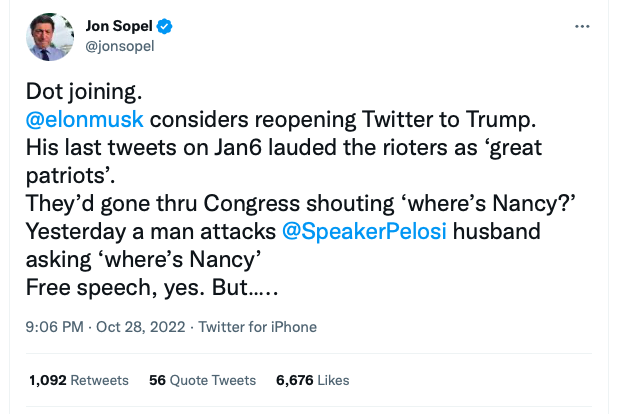 Incidentally, this wave is hitting media land really hard. Here is how Irish Republican blog, the Broken Elbow described it:

“This may surprise or even shock, but in all the media reports and interviews in the US media – primarily the electronic media – of the attack on Nancy Pelosi’s husband, the one name missing in discussions of what happened and why, is that of Donald Trump, even though, I would guess, everyone and his or her dog knows that undoubtedly he was the inspiration for the person who wielded the hammer or whatever he used to do his damage. And you thought the Irish media in the Troubles was bad?”

Undoubtedly Mr Fenian poltroon? Based on your analysis of the banners that are there for all to see all around the assailants house? Whatever you say, sir.