Donald Trump is back on twitter. Cue floods of liberal tears and wailing leftists protesting about why this is a threat to free speech and giving a potential GOP candidate for the President the same platform as a Democrat imperils democracy. It has also unleasshed lots of fake news. Take the tweet below from Jonathan Pie, aka the left wing comedian Tom Walker.

Pie does not flag up the offending tweets with actual quotes but just leaves you to assume that Trump encouraged the rioters with his last few tweets as that is the narrrative pushed by the Democerats and the entire liberal media.

Just for reference I offer you Trumps last two tweets before those blue haired millenial woketards who used to run twitter booted the President off.

I rest my case. Didn’t twitter used to have a “disinformation department?” Oh silly me. It never found any left wing comedians guity of disinformation just folks who questioned the covid narrative, thought voters should see Hunter Biden’s laptop or held other views that marked them out as modern day Nazis. 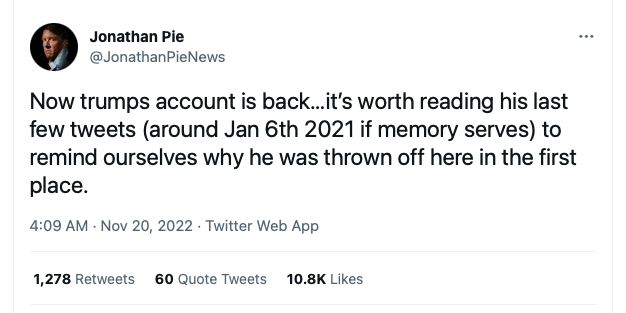