The liberal take on Islamophobia & multiculturalism in pictures

I asked a Western liberal - that is to say Darren Atwater - to load the cartoon below which is - in my view - a very witty play on the way the liberal-left, wedded as they are to multiculturalism, deal with militant Islam. Darren's reaction was to attempt to headline the cartoon ""Not sure how this is different to Christianity." And that tells you all you need to know about the modern western deluded liberal mind. 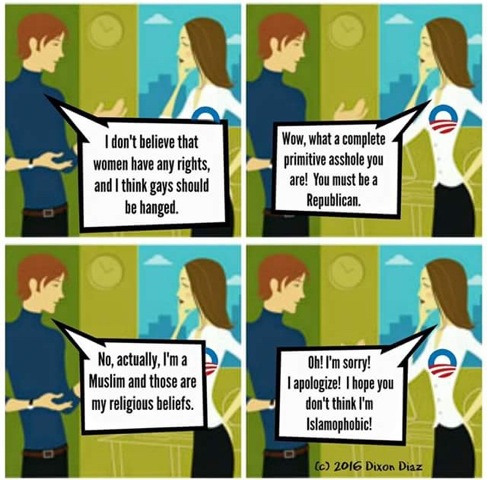 Because while certain sections of Christianity are not actively pro gay rights or women's rights, Christian societies do not hang gays en masse, or bury them in concrete (Gaza) or chuck them off tall buildings. And generally Christians tend to treat women as equal to men.

The muddle headed liberal cannot accept the problem that many of those whose rights he defends in the name of multiculturalism simply do not share his beliefs when it comes to protecting other minorities whom the liberal also supports.

Of course there are some minorities that the western liberal does not defend and indeed thinks it is "cool" to despise and deride. Fox hunters for instance or Christians.

Mocking the established and dominant religion of the West or those folks who cling to its supposedly outmoded beliefs is as much a part of the liberal DNA as supporting multiculturalism. Or showing a complete sense of humour failure.