Photo article: Hit by Lightning, losing all power and getting out of the Greek Hovel before the floods get too bad

I mentioned earlier that the weather was turning for the worse at the Greek Hovel. I should cocoa. As I drove back from a very late lunch in Kambos, Mark Slater called. I parked almost at the top of Snake Hill and we talked but then it started raining. After a good chat I had to hang up as the rain was hitting the car roof so hard that I could barely hear a word. I made it home and saw a small man holding an umbrella walking towards me from the side of my house and waving.

Who on earth could be up here in this weather - what a lunatic. The rain was so heavy I could not see who it was until we were just yards apart. Vreki said the shepherd, for it was he. I said ne for it was indeed raining. He then started speaking Greek again but mentioned the word elias (olives). Of course the rain is good for them and so I said ne again. 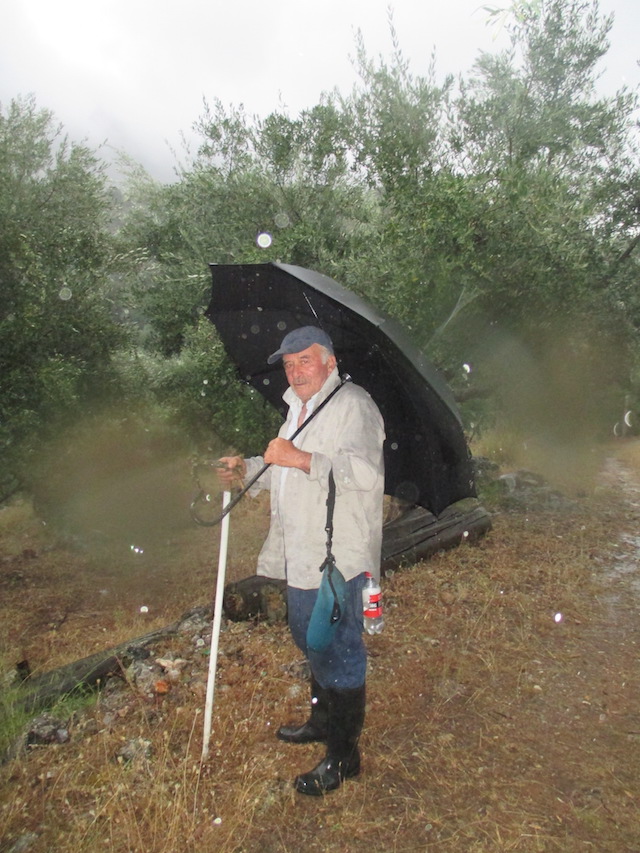 By the time I reached my house twenty five yards away I was semi drenched so heavy was the rain and I decided to record a podcast quickly. Half way through - as you can hear HERE - there was a massive bang, the lights flickered and plaster fell from the ceiling. There is a first time for everything and that was my first experience of a lightning strike. The storm continued and I soon lost all power. The clouds on the mountains told me this was not going to get better tonight.

As it was getting dark and as I feared I might at some stage get cut off by flooding I made the decision to evacuate. Call me a big girl's blouse if you wish. It might just be the fusebox but I really do not fancy a night without power, without the internet and cut off by floods in the middle of a violent thunderstorm in the middle of nowhere.
Already the puddles on my land are getting large. How my olives must be loving it. The top one is just by the bat room, the larger one - about twenty yards long - is at the end of my land as, an increasingly muddy and slippy, track heads through the olive groves towards snake hill. 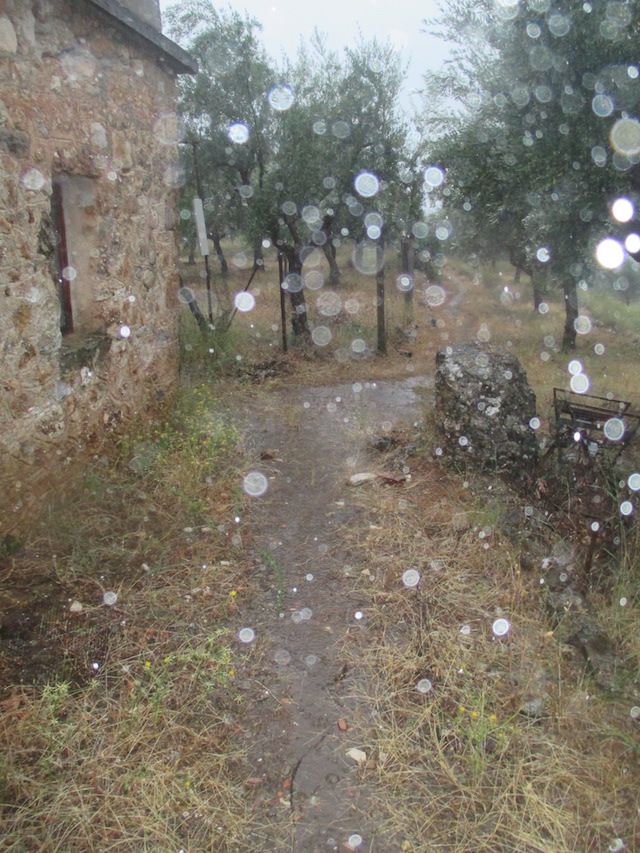 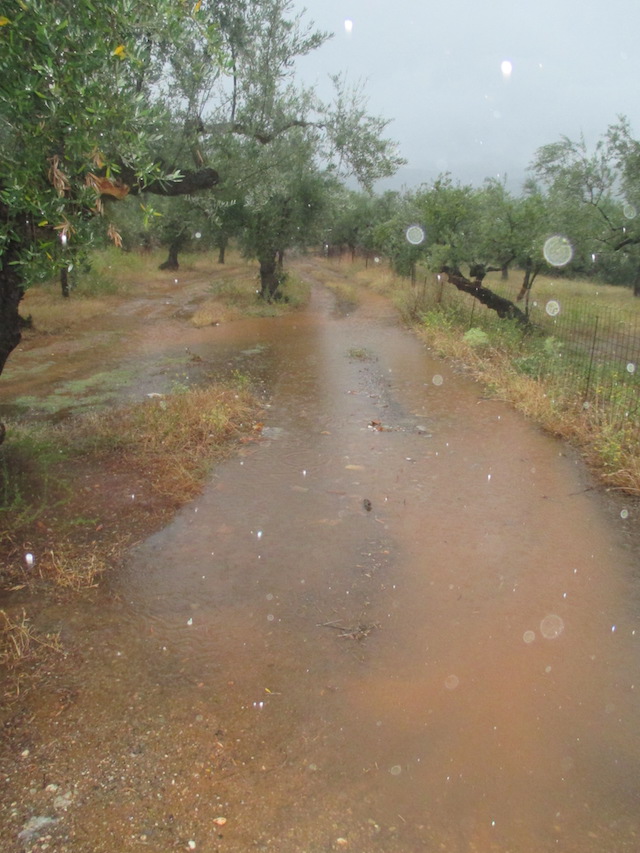 At the bottom of the valley the dry river was springing into life but on the other side as I swung right onto deserted monastery hill it was already a river. I pressed on 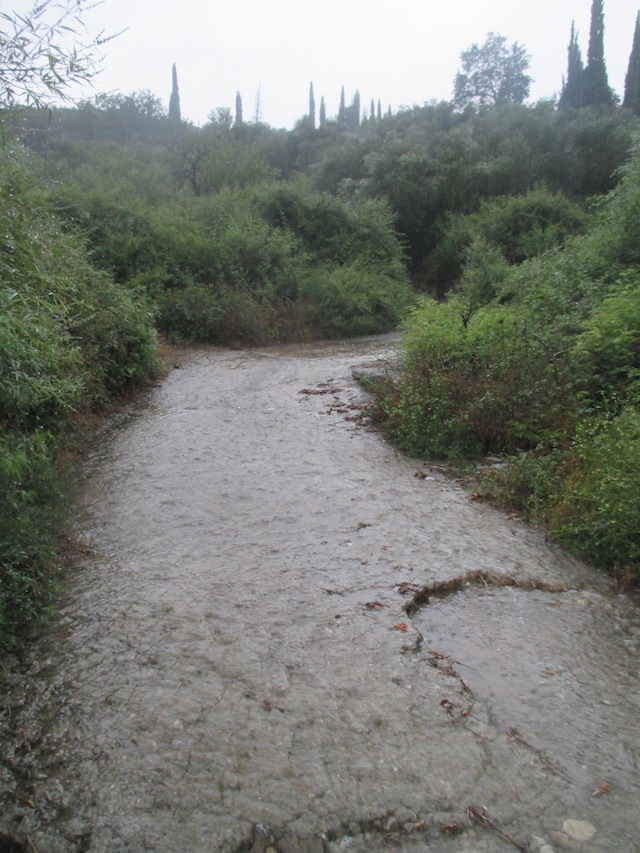 On the road to Kalamata traffic was - understandably - light and so at the gorge where the double murder took place a couple of years ago I stopped my car and took this picture of the view up towards the mountains. What a place to live, eh? 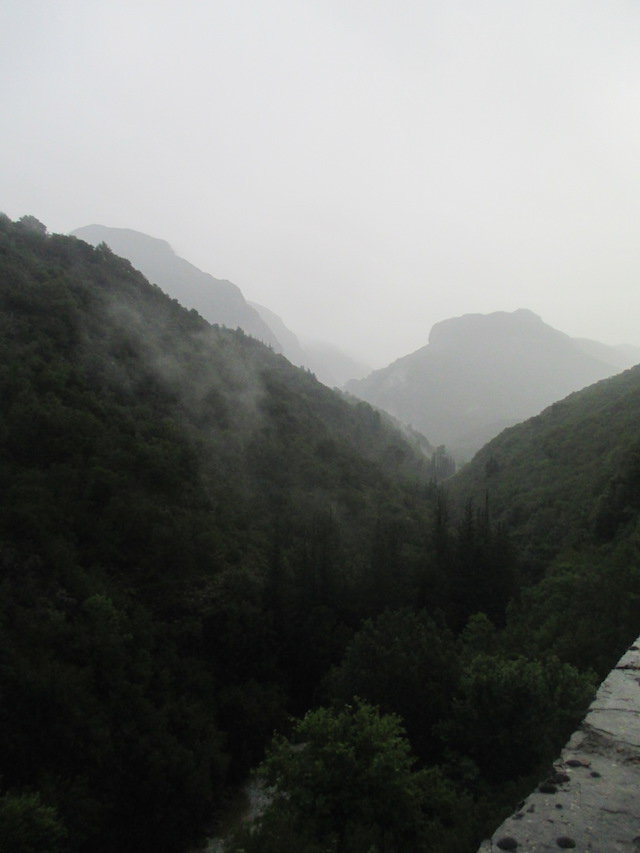 The rain kept on beating down ever more heavily as I made it into Kalamata. At one point on the mountain road all the cars stopped as the lighting crashed around us. Gradually a small convoy plucked up courage and I tagged along as tail end Charlie at 20 kmh all the way down to the sea and Kalamata. Sometimes we drove on the right, sometimes on the left to dodge the biggest puddles and at some times we drove in the middle.

Even here in Kalamata, one of the larger towns in Greece, the roads are in places a foot deep in water. At times I worried that my small hire car would not make it through but we made it. In a nice warm and dry hotel room, the thunder and lightning continues outside. It is still raining heavily.

Heaven only knows how the poor snakes and rats are coping back at the Greek Hovel up in the mountains.