In defence of a real American, Melania Trump, the liberal media just do not get it 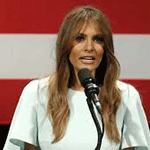 The liberal media are normally keen on immigrants who work hard and get ahead. That is unless they happen to be one of the various woman who at one time or another has been or is married to Donald Trump. And so last week the BBC, The Guardian and the rest of the beltway insiders stuck it to Slovenian born Melania Trump in a big way. Once again I am pretty sure they misjudged America which will warm greatly to Mrs Trump in the coming months and which is almost certainly now rooting for her against the beltway chatterers.

The liberal media had it in for the immigrant Melania on two grounds. Firstly she is married to that son of an immigrant, Donald who is best known for hating immigrants. Or at least that is the stick with which the Beltway classes beat this year's GOP nominee for the White House. Secondly Melania is blessed with good looks and used to take some or all of her closes off as a model. As we know, feminists think that women who gain economic self-empowerment by modelling are bad. Being ugly and on welfare is far better.

And while politics is showbusiness for ugly people, liberal politics is show business for people who's hatred makes them very ugly indeed. Women on stage at conventions are meant to look like crooked Hillary Clinton not Melania and to know every inch of policy minutiae rather than to know about the real world having worked there. Woman who are there to support their husbands are just to be dismissed as lightweights, unless, of course, they are there to say that the intern their husband was banging was a slut who asked for it.

Melania's speech writer allowed 1% of her speech to be lifted from Michelle Obama. The liberal media went for the jugular. As the total non scandal broke a woman who did not deserve ridicule received a media torture session. "Perhaps the silly woman did not realise what she was doing as she was too stupid and can't even speak proper English". How the liberals sneered in the most unpleasant and patronising way possible..

Out in real America I sense most folks saw a woman who had, like them or their forebears, come to America speaking little no English. A woman who did what she had to to make a better life, even if it involved doing some things which a Wellesley educated middle class woman would not have had to contemplate. A woman who smiled a pleasant smile and radiated a belief in her husband. Those are the values of most folks in America although not those of the sneering liberal media elite. As they heaped more pious disapproval on poor Melania, more and more Americans will have put a metaphorical arm around Mrs Trump to show their support and understanding. The media just do not get it.

The Clintons are members of the political establishment through and through. Melania could not be more different. And out in real America that contrast is noticed and appreciated.

Last week's mauling of Melania by the media will have won her tens if not hundreds of thousands of new friends.