Louisiana Floods caused by global warming or climate change - a history lesson for the nutters?

We are told that the awful floods in Louisiana of August 2016 are caused by climate change or global warming. Whatever. Here is a report and a photo of the flooding in Louisiana. Guess the year - hint it is not 2016. 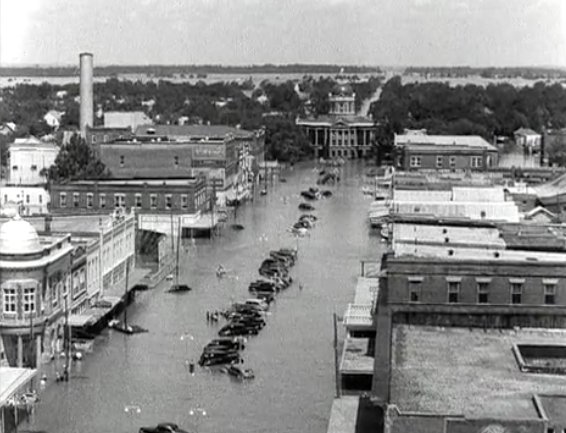 Rainfall peaked at 37.5 in (953 mm) in Miller Island off Louisiana, making it the wettest tropical cyclone in state history. Nineteen official weather stations in both Texas and Louisiana recorded 24-hour rainfall totals for the month of August as a result of the slow-moving hurricane. Property, livestock, and crops–especially cotton, corn, and pecan crops–were heavily damaged. Entire ecosystems were also altered by the rainfall.

The highest of these was in Crowley, where 19.76 in (501.9 mm) of precipitation fell on August 9; the station would record 33.71 in (856.2 mm) of rain over the course of the storm. The torrential rainfall submerged the city under 2 ft (0.6 m) of floodwater.[12] In Cameron, the storm dropped 21 in (533 mm) of rain was reported.[16] In St. Landry Parish, bayous flowed over their banks, causing refugees to evacuate to Opelousas. In the Acadiana region of southern Louisiana, the resulting floods were considered worse than the floods that resulted from the Sauvé's Crevasse in 1927. There, whooping crane populations were severely impacted by the rainfall, and only one was known to be alive by 1947. The floods inundated roughly 2,000,000 acres (800,000 hectares) of land in Louisiana. Much of the lowland areas remained underwater until October.

Yes that was 1940. By contrast in the worst affected areas this time over the course of three days we are told by the local press that

All in all, between last Tuesday and this morning, neighborhoods around Livingston and Baton Rouge saw more than two feet of precipitation.

And as it happens the flooding in 1940 was the worst since the disaster of 1849 which coverred a far greater area than the "global warming" floods of 2005. So on that basis can the global warming nutters explain how come the rainfall and flooding was worse 76 years ago and 167 years ago than it was this year. Where were the 4 by 4s and the coal fired power stations then?

Like the medieval warm period these facts are just inconvenient truths for the climate change nutters of the liberal media and political elite. They can be ignored as they stiff the poor and middle classes with more taxes to "save the frigging planet." Anyone who can read a history book knows that climate and weather are just God's little joke. They change. Get over it.

PS. Oddly 1939/40 also saw the coldest winter in Britain for decades. That was just eight months ahead of the very warm and very wet days in Louisiana as a tropical storm moved in. The events in Britain were, presumably, down to global warming too