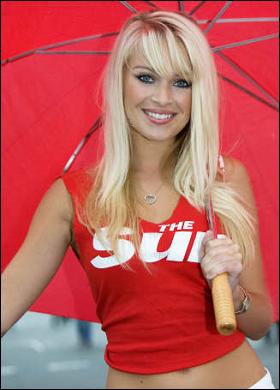 Oh happy days. The only way that Monday night's Presidential debate can get better is if crooked Hillary has a coughing fit and then another pneumonia induced collapse live on air. And if anything will bring that on it is the now confirmed presence of Gennifer Flowers in the front row. Gennifer who? say the millennials who still think that the Clinton family are not pathological liars and sleaze-buckets. Welcome, my young friends, to a refresher course on the 1990s.

In the 1992 Presidential election campaign Gennifer, a former playboy model and clear piece of white trailer park trash, popped up to claim that she had has sex with Bill Clinton. Bill went on 60 Minutes and denied this. Occasionally in the years that followed Gennifer would pop up again and even had tapes of her chats with Bill. Advisers to Bill and Hillary herself said these tapes were falsified and that Flowers was just a lying piece of trailer park trash.

But by 1998 when Bill was in a spot of bother for allegedly molesting another woman who was not his wife and who actually did not welcome his advances, that is to say Katherine Willey, Clinton, under oath admitted that he had enjoyed extra marital sex with Flowers. Clinton admitted to one liaison in 1977 the tapes and Flowers suggest that there were a lot more.

But the bottom line is that Bill Clinton lied on TV repeatedly about Flowers and that both Clintons and their aides then smeared Gennifer repeatedly in the press. This is the way that the Clintons operate: they lie, they smear opponents, they cheat, they mislead the American people.

Millennials might think that the emails and all that stuff is a one off. The re-emergence of Miss Flowers will make them realise there is a pattern of Clinton family deceit here.

Perhaps Katherine Willey might also pop along to the debate along with Paula Jones, Monica Lewinsky, Juanita Broaddrick and many others. You could pack out the studio with women with whom Bill Clinton is alleged to have had relations, mostly but not all consensual, but who when they kicked up a fuss found themselves harassed by Government agencies and the Billary smear machine.

It is not that Bill is repeatedly unfaithful to Hillary that is the issue. It is that he and she lie and smear women who fall victim to him. It was Hillary who, for instancem branded Lewinsky, an intern seduced by POTUS, as a slut after Bill had lied about the incident.

That is the trust deficit which is is for the audience across America to ponder on Monday. Meanwhile as Hillary looks up at the audience in the studio there will be a familiar face staring down at her from row one. Cough, cough.