Photo Article from the Greek Road Trip - back to 2012 in Zitsa and the world's greatest baker, I feel awful

It was in the small town of Zitsa that Lord Byron sheltered from a thunderstorm when riding with his friend Cam Hobhouse in 1809. Poems from that episode duly followed. My Aunt L, to whom I chatted today from Delphi on Cochrane matters, married a Hobhouse but it was not that 1809 sheltering or Byron that took myself and Joshua to Zitsa yesterday.

It was Harrow that gave Sir Winston Churchill his great powers of oratory. It was Harrow that made Lord Byron such a wonderful poet. And it is the same establishment that has allowed the Sith Lord Zak Mir to polish up the complete turd that is today’s statement from Big Dish (DISH) into something almost respectable. Given that Zak is almost completely illiterate I applaud him.

Tom Winnifrith GreeceCast will traitor Tsipras show spine & tell the banksters to screw themselves this time?

The IMF banksters have made new demands of Greece which are just not acceptable. Will PM Tsipras finally show some spine and tell the banksters where to get off, default and offer hope and a future for a post bankrupt Greece. Or will he once again be a traitor to his nation and his people and cave? This is now getting very interesting. Once again I suggest Tsipras reads the great Lord Byron (HERE) and thinks about what could be for a Greece freed from the debt and the banksters.

The Isles of Greece by Lord Byron

What would the good Lord Byron - a man who died in Greece during the war of Independence -  say of Greece today, a country once again not its own master? To walk away from the Euro and to simply default on its debts, to stand on its own two feet and build again with pride? Or to accept further shame and humiliation and the impoverishment of its people in return for taking on yet more debts to enslave the children and grandchildren of todays Greeks?

Greece should default and walk away from the banksters of the EU and IMF with pride leaving its unpaid debts as their problem not ours.

It’s My Wedding Anniversary so an almost day off

A year ago today at a house owned by the family of the great Hellenophile Lord Byron the woman formerly known as The Deluded Lefty became The Mrs. Right now she is outside tapping away at a paper for her sociology work on why capitalism causes cancer, global warming and is a construct for patriarchal hegemony for white men. Okay I think I might have got the subject a bit wrong but I am probably not far off.

I’m off to chop down some more frigana at The Greek Hovel where we are staying and then it’s switch off time. Unless there is a Quinnovation Group emergency this is a day off. Thank you to the Mrs for 365 wonderful days, it is time to down tools.

And so the journey to the spiritual homeland of Greece begins...

I have explained before my family’s incredibly strong links to Greece. My father’s mother’s family were classical scholars writing books about the place 150 years ago. Both of my father’s maternal uncles are buried there: one fell down a mountain and is buried at Delphi, the other was killed in the Second World War and is buried in Athens. My father’s mother was named after a Greek island – er..Lesbos. It all had a different sort of meaning in 1900.  My father’s sister married a Hobhouse ( Byronologists will understand that). My father writes books on the place and it was always a place for family holidays.  It seems the family is bound to poor Hellas.  And so it is where I headed off to last summer as things fell apart.

And now for the second time this year I head back. This time on my own with my rucksack. My partner (whose sister is, as it happens, married to a Greek) arrives in ten days to be shown a bit of Albania and a couple of places in Northern Greece. But first I have nine days with firm plans in terms of destination for the first four but no hotels booked at all. I shall just see what happens, try to walk a few pounds off in the heat and see where I end up.

The journey starts at Gatwick at 5.30 AM and so when I lock up at Real Man in an hours’ time, having recharged my phone, I shall head off to the station to prepare for a few hours writing at the airport. Tomorrow night I am on a bus from Corfu to Athens. I would imagine that I will be tired enough to sleep for most of the journey. And then at 6 AM Thursday the holiday really begins as I head into the Southern Peloponnese. My laptop – as ever – travels with me as does my video camera so, fear not, this website is NOT on holiday.

PS. I am naturally wearing my It’s Time to Leave T-shirt as I head off. I feel sure that the odd Greek would agree with the sentiment.

Farewell Zakynthos – Am I a snob? Yes

For once I spent my Greek holiday not on the mainland but on an Island. It is not something I plan to make a habit of for reasons that I shall admit to – I guess that I am just an unreconstructed snob. It all started at Gatwick airport last weekend as I waited with my partner in the departure lounge for a flight to Zakynthos. As I surveyed my fellow passengers I noticed a large number who were young, had large numbers of tattoos and various bits of their body pierced, seemed to use the F word in every other sentence and who were loudly discussing how they were going for “the season.” My heart sank.

By the time the flight was passing over Dover my fellow passengers were already drinking. My heart sank some more.

And so to Zakynthos.

I went to Zitsa partly on the Byron trail but largely because I am a foodie. Perhaps that explains the weight issues. Okay, it does. On the Byron front I read some poetry online last night as I sat looking down over the valley. It was hard to think of Byron drenched in a thunderstorm in this place as the temperature zoomed past 40. At some stage I will try to put together a piece comparing and contrasting the good Lord’s brave Hellenic verse flowing with pride at a nation about to be reborn with some of the craven words of today’s Greek leaders. But just to show that Byron is not forgotten in Zitsa I bring you a picture of a street sign. Not perhaps the most interesting way to start a piece but it makes my point. 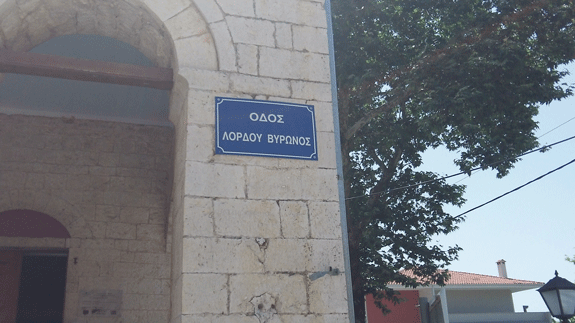 And now to the most important matter – filling my tummy. I detailed the local sparkling red wine last night here. Frazer Thompson of Chapel Down has emailed me to say sparkling red does not work and gives you headaches. All I can say is that in my attempt to acquire the taste, after three glasses I had no headache. The Zitsa wine festival is in two weeks and I am sorry that I shall miss it. In fact I am sorry to leave Zitsa because a) it is gorgeous and b) I met the most wonderful couple and had lunch with them today and would like to have stayed longer. They have written their version up here. They obviously think I have a screw loose but humoured me delightfully. They restore ones faith in humanity.

Greeks, Lesbians and Vlachs – why my fascination with Greece?

I am asked why am I so fascinated with Greece? In part it is a romantic thing – the idea of brave Hellas reasserting its independence and history – see my great hero pictured here. But it is more a family thing. My father’s family have been Helleno-nuts for 200 years. I shall touch on Lesbians, in that vein, below.