#CelebrityInjunction farce over Thursday morning? FFS Even my father can furnish you with details now

Up until ten days ago while my father, Thomas John Winnifrith, could wax eloquently on

Charon – my nearest neighbour at the Greek Hovel

I have no pictures of Charon. That is because he always pops up by surprise. If you arrange to meet he is never there. He just turns up and then disappears.

His house is the nearest one to the Greek Hovel. The long and winding road from Kambos does not end at the hovel but turns back on itself and up the next hill. I really had no idea where it headed but one day curiosity got the better of me and I turned my bike around and headed on up. After about a mile and a half you arrive at a ramshackle but clearly inhabited set of buildings, the house of Charon. He is one hill higher up than me. The next range of hills behind him leads straight into the mountains.

Charon is not his real name. It is Nikko but since half the village is called Nikko I stick with the name I gave him when we first met. The poor man was returning from a walk into the village to buy cigarettes. It was a blazing hot day and not being the fittest fellow on this planet he was dripping with sweat. His greying hair is longer than mine and with the sweat pouring off him my mind sprang to Virgil’s description of the ferryman to the underworld. Nikko’s rather long face always looks a little sad even when he is smiling.

Who pays the Ferryman? ‘Elf n’ Safey in Albania

Many folks might think this phrase refers to the conundrum scousers face as they try to cross the Mersey. The answer in that case is of course you and me via the welfare system. But classical scholars such as Evil Knievil will instantly recognise this as a reference to Charon, the character who transports the dead across the rivers Styx and Acheron and into Hades, the underworld. Because Charon did not work for free, when a Greek died it was customary to place a coin in his mouth to settle that bill and give him or her passage.

You did not have to be dead to go to Hades. Certain heroes travel there and return, most notably Aeneas. Thus in book six of the Aenid (which I had to study for O-Level Latin – grade A natch), Virgil describes the ferryman thus:

Butrint - A place to see before you die

Yesterday, I recounted my epic journey from Butrint to Greece. But I start with the journey of Aeneas in Virgil’s The Aenid. The great man approaches Butrint ( the world heritage site I visited yesterday in Southern Albania) and says:

I saw before Me Troy in minature, A slender copy of our massive tower, A dry brooklet named Xanthus…and I pressed My body against a Scaean gate. Those with me Feasted their eyes on this, our kinsmen’s town. In spacious colonnades the King received them, And offering mid court their cups of wine They made libation, while on plates of gold A fest was brought before them.

Ahem, yes well up to a point. In fact up to no point, that is all cobblers. This place had nothing to do with Troy. It would have had no towers, at that point no colonnades and about as many plates of gold as there were left in the Bank of England after Gordon Brown has been in charge for six months. There is a Scaean gate but this is simply a gate in the wall, given this name by a modern archaeologist after the gates of Troy – there is no suggestion that the gate here was in fact based on anything from Troy (and was almost certainly built well after the fall of Troy). But that is not to say that this was not an amazing place for many hundreds of years, in fact for two millennia.

It was founded several hundred years before Christ as a sort of health spa. The clean fresh waters from the lagoon that surrounds Butrint were meant to have medicinal properties as well as being a rich store of fish. 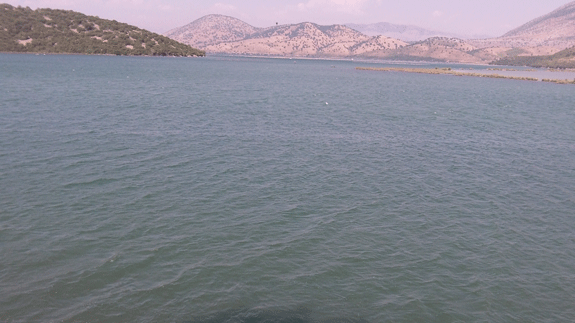