Who pays the Ferryman? ‘Elf n’ Safey in Albania

Many folks might think this phrase refers to the conundrum scousers face as they try to cross the Mersey. The answer in that case is of course you and me via the welfare system. But classical scholars such as Evil Knievil will instantly recognise this as a reference to Charon, the character who transports the dead across the rivers Styx and Acheron and into Hades, the underworld. Because Charon did not work for free, when a Greek died it was customary to place a coin in his mouth to settle that bill and give him or her passage.

You did not have to be dead to go to Hades. Certain heroes travel there and return, most notably Aeneas. Thus in book six of the Aenid (which I had to study for O-Level Latin – grade A natch), Virgil describes the ferryman thus:

There Charon stands, who rules the dreary coast
A sordid god: down from his hairy chin
A length of beard descends, uncombed, unclean;
His eyes, like hollow furnaces on fire;
A girdle, foul with grease, binds his obscene attire.

Charon was a rather frightening character. Since I was thinking of Aeneas as I visited Butrint, Charon also sprang to mind as I took the ferry across the 100 yards that separated the main old settlement from the triangular Venecian fort and the road to Greece. Not least, because looking at the floor of the ferry which was made of creaking old planks nailed together as if they were covering one hole after another, and contemplating the fierce current that swirled underneath us and my heavy rucksack which would inevitably drag me down, I thought I might soon be staring at the old sod soon. Do you think Charon accepts Lekke as a fare? What about Greek denominated Euro? 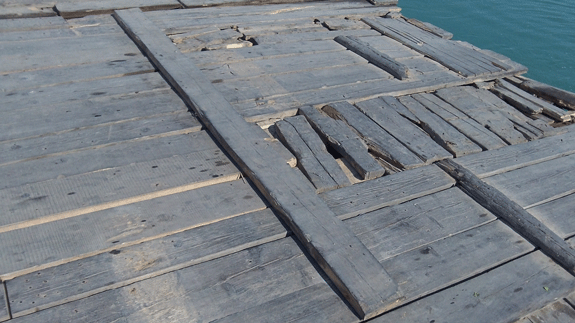 As it happens the ferry which was pulled by a creaking old winch made it across with no problems as it has for years and will do so, I am sure, for many more. The Ferryman himself seemed about as cheerful as Charon and about as clean. But then standing on a few planks of wood as they are pulled to and from across 100 yards of water 100 times a day does not seem like a job offering much variety. 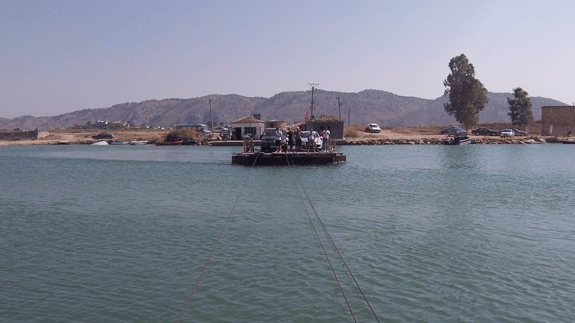 My fare for the journey was nil. Foot passengers and bikes pay nothing. Cars pay 100 Lekke (60p). And so in about half an hour of watching, travelling and having a glass of soda water on the other side I reckon this service pulled in about £4. Electricity costs? Depreciation/capex nil I suspect, staff costs (2). I suppose in Albania this thing makes money.

There was an admirable attitude to “elf n safey” rules. I.e. there were none. If the ferry had started to pull out as you arrived you could run and jump on – at your own risk. I ran and jumped with rucksack and made it. But with no barriers at either end of the boat if you wish to risk death that is your call. The barrier on the side is one steel rope. Hardly child proof. You can smoke on board. And as noted above the floor of the vessel looked highly suspect. After this a return to London is going to be a bit of a shock.