The kind owners of the Azteri hotel here in Metsovo switched the TV onto the BBC World News channel to please me. Since neither speak English it must have been all Greek to them, to me it was just the usual Trump hatefest. I listened carefully as I was told repeatedly how much folks in Europe and in Britain all disliked poor Donald Trump. I am sure that among the liberal media elite, the overpaid privileged bien pensants who serve up garbage on the BBC that is correct. But what of the ordinary folks of Europe?

I found myself listening to a Radio 4 programme the other day in which liberal arts elitists in the most pro remain ward in the UK, in Cambridge, were asked what they thought of Brexit voters - the gist of the programme was that what you voted on June 23  was down to how well educated you were. One posh sounding chap said it was not down to education it was down to racism. The BBC asked "so were 17 million people really all racists?" The chap kindly replied "not all of them". Others disagreed it was down to intelligence,we Brexit voters voted that way because we are thick, certainly not bright enough to understand so complex an issue.

Of course the BBC also thinks that Trump voters in the US are largely thick and/or racist. Europe being so much better than the USA, the BBC would have us believe that no-one here likes Trump.

Of course they are wrong. Many of the tens of millions who this year will back Wilders or Le Pen or indeed backed lefty Alex Tsipras here in Greece before realising what a treacherous little snake he was, would also back Trump. They do so because their loathing of the EU elites, those the BBC adore, is so intense.

For the BBC populism means only bad things. For the ordinary folks in Europe it means sweeping away corrupt and out of touch politicians who despise the views of the plebs and do not hide it, who ultimately support only a warped version of democracy. The tide it is a turning. The imagery on this Greek front page is oh so apt. 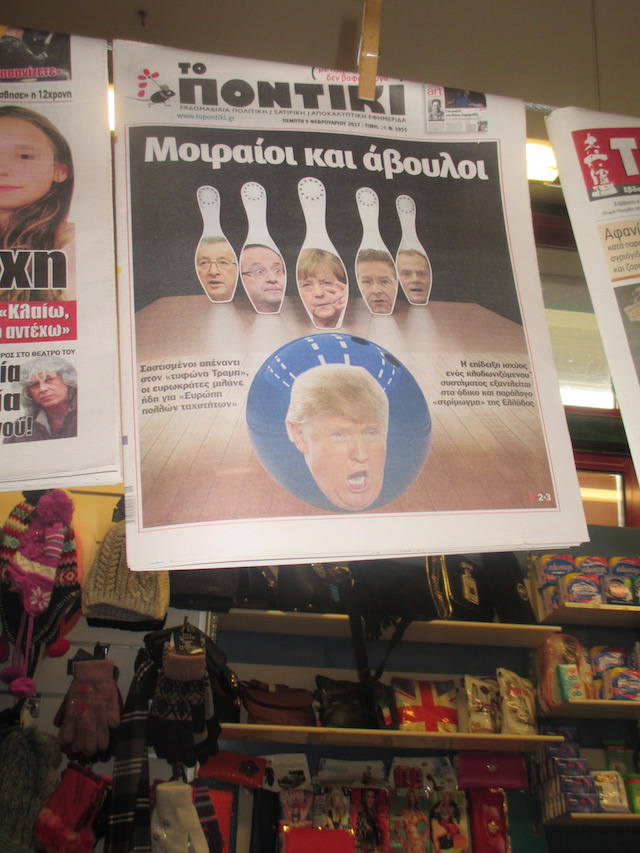