Having visited murder gorge yesterday I showed my photos of the old bridge to the folks in the Kourounis taverna in Kambos and with lovely Eleni translating I asked just how old the stone structure below actually is? 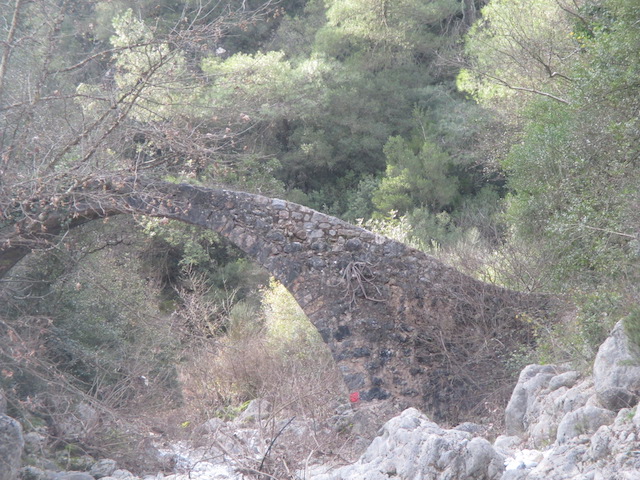 The conclusion is that it was built around 1850 but why then and not earlier? Here my father and I are in agreement: it is all down to the accursed Turks. When Greece was under Turkish rule the Mani peninsula was almost autonomous. The war like folks here engaged in protracted blood feuds as they had always done and the Turks saw little reason to unite the Maniots by pulling their beard with a military invasion.

As long as they were not too naughty on the piratical front they were best left alone. They had no great wealth to plunder and the towns and villages were remote and connected by paths and tracks with no roads. The Maniots were happy with this arrangement and thus why bother to construct a bridge across the natural defence of this deep gorge separating the Mani from lands under Turkish rule. When the river flowed it would have been impassable. When it did not defending the Mani rom the steep valley on the Kambos side would still have been a sinch.

The Maniots had no need to head up to Kalamata. They were self sufficient and there were more important things to do like killing your neighbours. Besides which if you really wanted to get to Turkish lands you could always go to a coastal port such as Kitries and sail up the shoreline.

Things changed in 1821 when on March 17 the Bishop of Tripoli in the heart of the Peloponnese called for an uprising across Greece. The first to answer this call to arms were, naturally, the Maniots who decided that it would be better to slaughter Turks than each other. Thus on March 21 the Maniots arrived at Kalamata and slaughtered the Turkish garrison there, without suffering a single casualty themselves.

The Maniots fought bravely in that war including the famous incident, recounted in full by Paddy Leigh Fermor in his book The Mani, when their women slaughtered a Turkish army. The men folk were being beseiged at Verga on the outskirts of Kalamata, defending heroically they repulsed wave after wave of attacks from a much larger Turkish force. So the Turks had a cunning plan: sending a largely Egyptian force down by sea to capture the Maniot capital of Aeropolis which is way down the peninsular and a couple of miles in land. This force arrived and only the very old men and the women working in the fields with their scythes were around. Naturally the women set upon the Turks and beat them back into the sea. As other men arrived with guns and swords the slaughter was complete with Turkish forces drowning and butchered with scythe and bullets en masse. When you view lovely Eleni in the Kourounis taverna remember that she is descended from such women.

When Greece became independent and gained a new king from Bavaria there were attempts, including the use of military force, to include the Maniots in the new order but they met an inevitable conclusion.

The Mani became part of the new Greece but with a certain degree of autonomy agreed. And it is only at that point that there was any point in making the gorge passable at all points. Only then would the Maniots feel any interest in heading off to the fleshpots of Kalamata to trade their sheep and olives for more useful things such as gunpowder and bullets for the blood feuding and other matters that could now continue as normal. Hence the bridge was built and until the 1970s, when the bigger bridge above it was constructed as part of the first road heading into Kambos, it was the link across the gorge.