George the Albanian said to be there at 8 AM and I, more or less, was. No one in Greece is ever on time and so I operate on the "when in Rome" principle. Having showed that I was a hopeless pryomaniac a few days earlier I was preparing for humiliation. I got it. 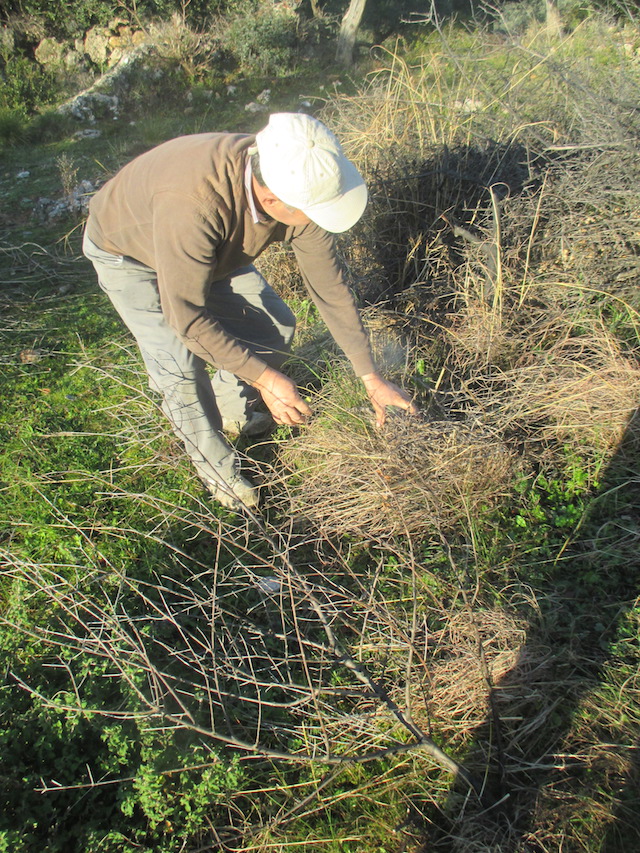 George gathered a bunch of grass a few twigs and then, as you can see, within a few minutes there was a roaring blaze of the olive branches we had cut as part of the harvest before Christmas. 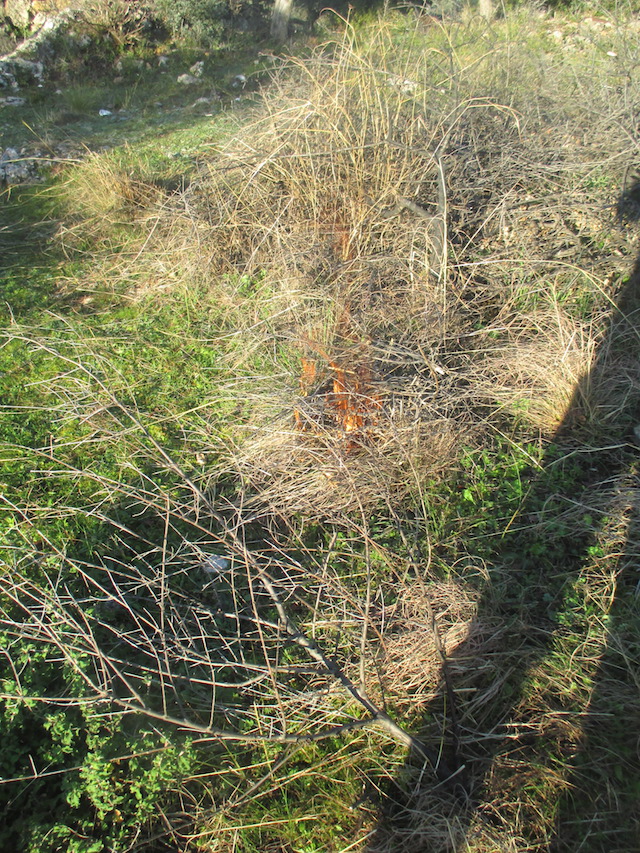 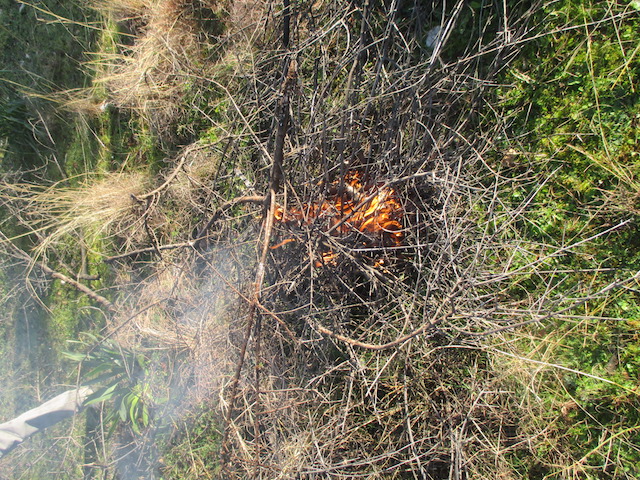 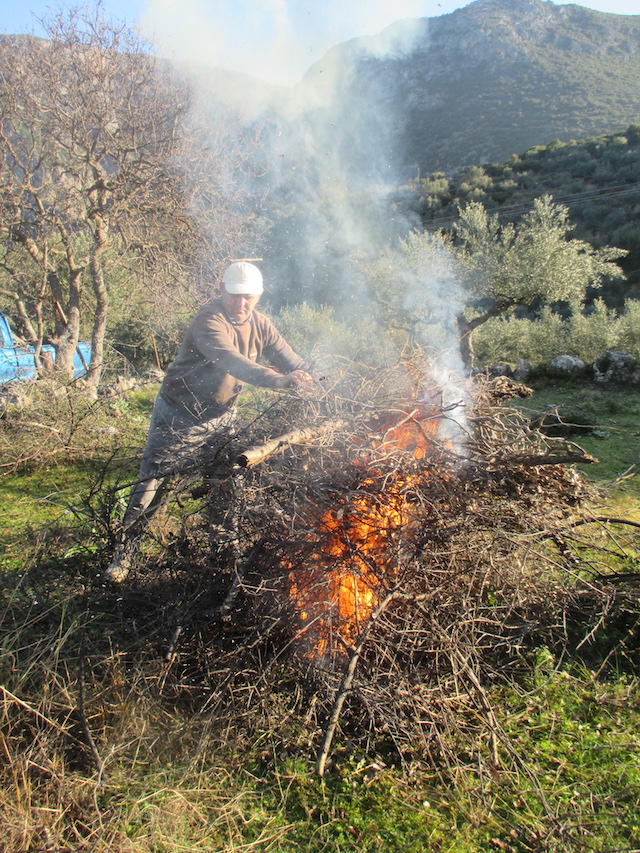 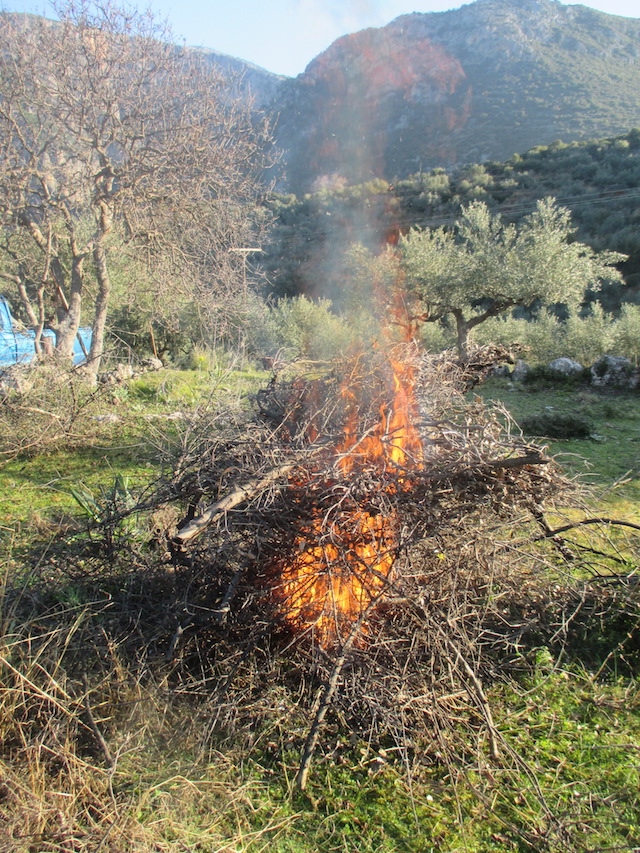 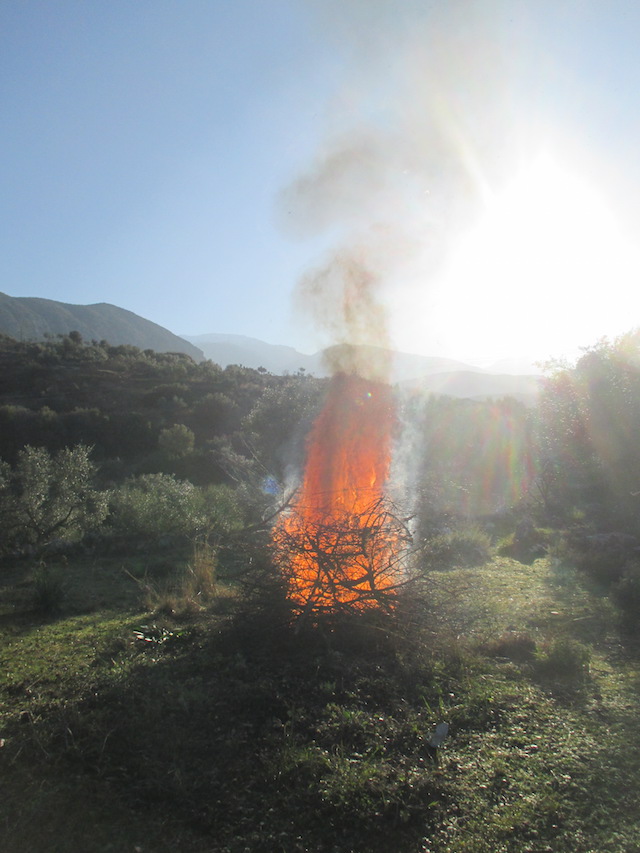 We moved quickly on to one of the terraces on the Mountain side of the hovel. Again within minutes the fire was blazing away. 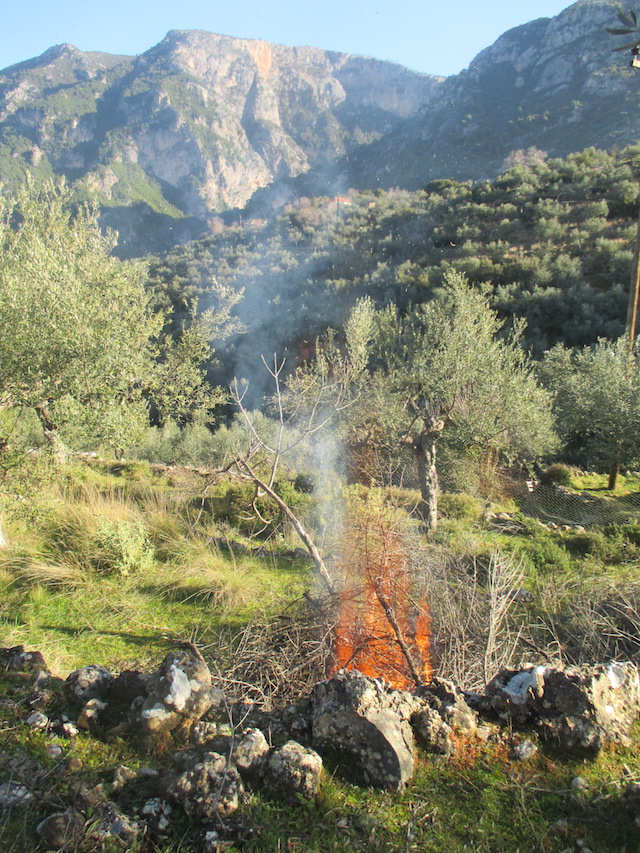 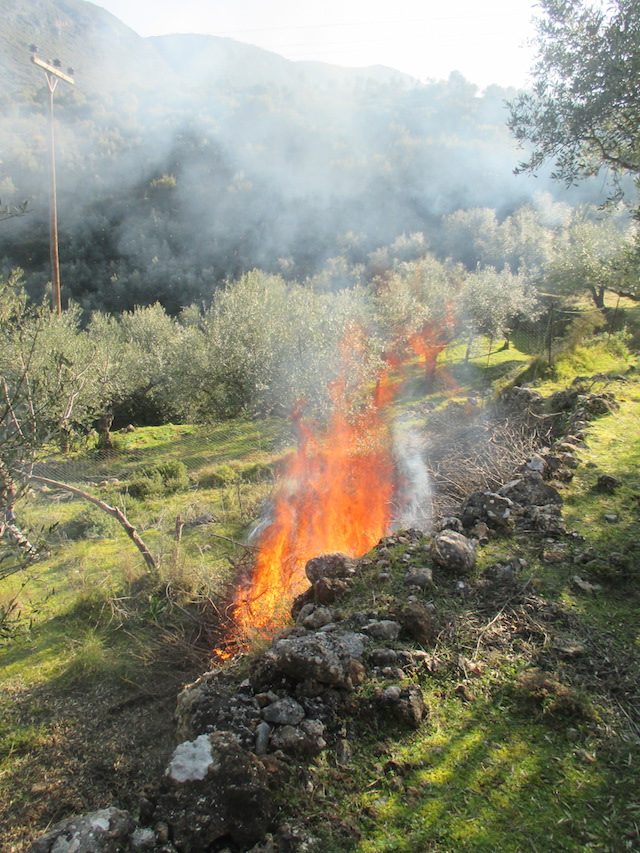 George's Mrs then arrived and she too was a natural pyromaniac. I having failed so miserably myself I could but watch and throw branches from the terrace above where the fires were running to the fires below. 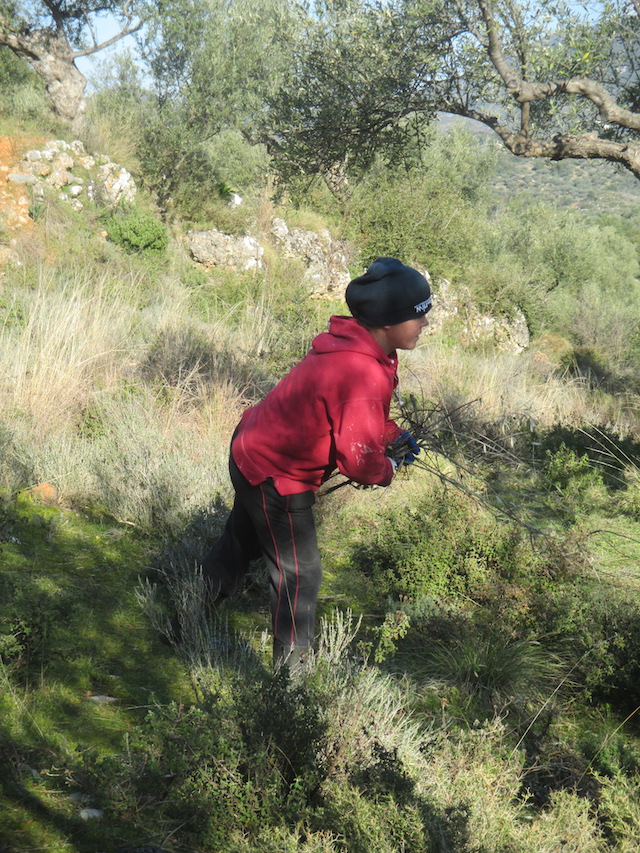 For George and his Mrs this was about setting fires to burn the branches. My hope with every fire was that it would also "take out" some of the live frigana plants which were once again growing despite three season of cutting and poisoning by myself. I think George sensed this but it was not his agenda.

After a while I decided to start a fire myself, feeling that having watched the master I could do it. I chose a spot where there were a stack of branches nearby and also lost of green frigana poking through the golden leaves of its brethren which I chopped last year. As you can see I too am a pryomaniac. But George wagged his finger. Apparently my blaze was too close to an olive tree and the fact that it was pursuing a scorched earth policy against the frigana was of no interest to me. that fire was left to burn out. But, sod the olives, I reckon that I did some damage against the real enemy! 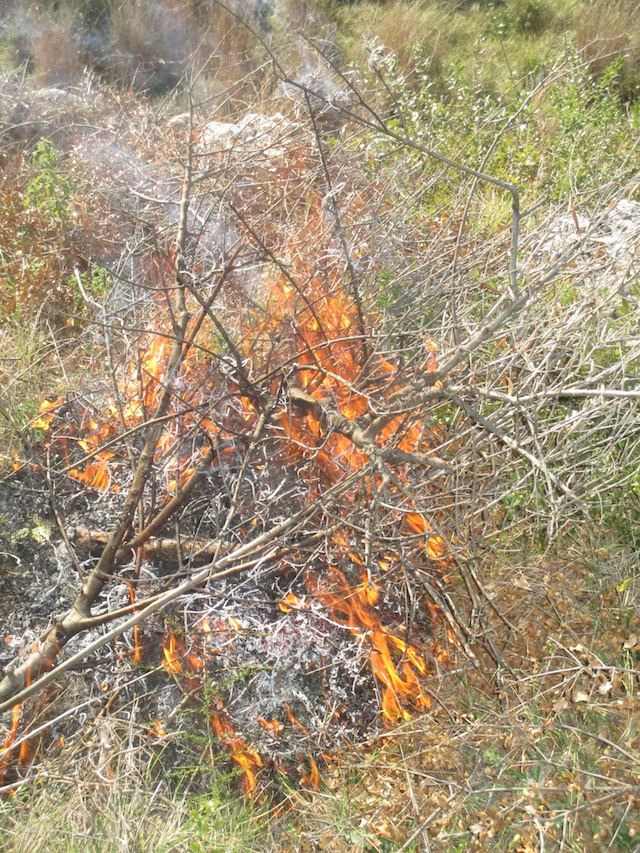 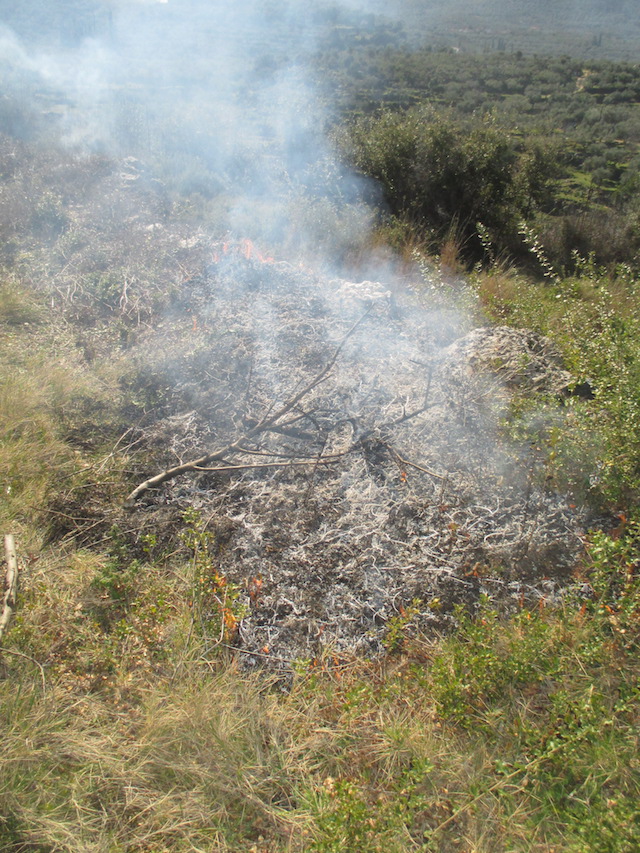 Later a couple of fires started to move up the slopes away from the original inferno to take out reasonable chunks of young frigana. I thought happy thoughts. George cut a branch off a tree and beat it out. I am just not thinking Greek, thinking of making lift happy for the olive trees. Instead I think of my enemy the frigana. 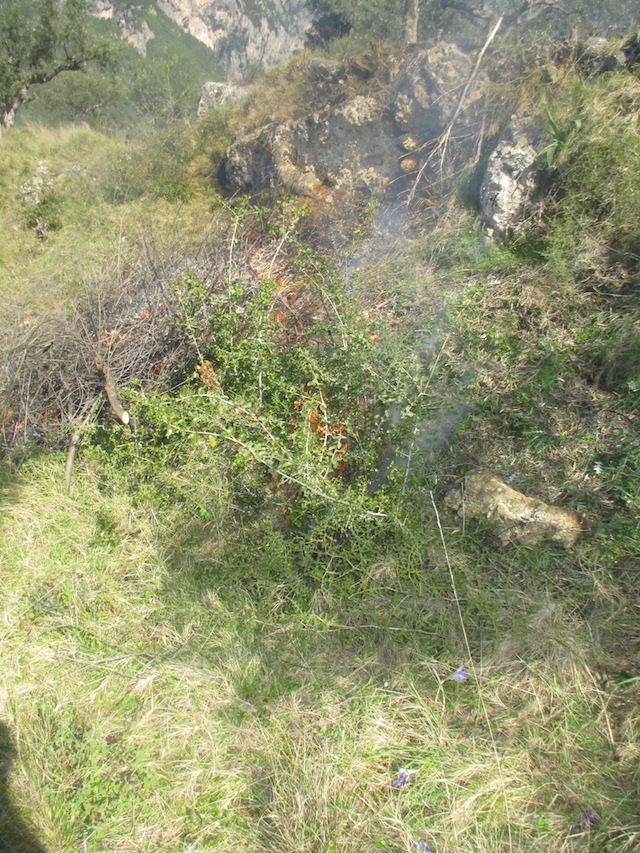 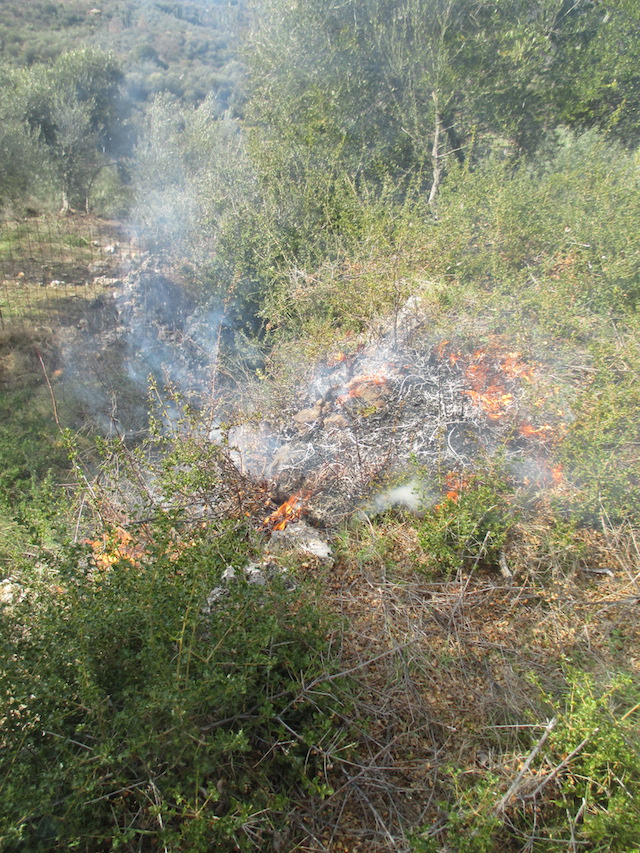 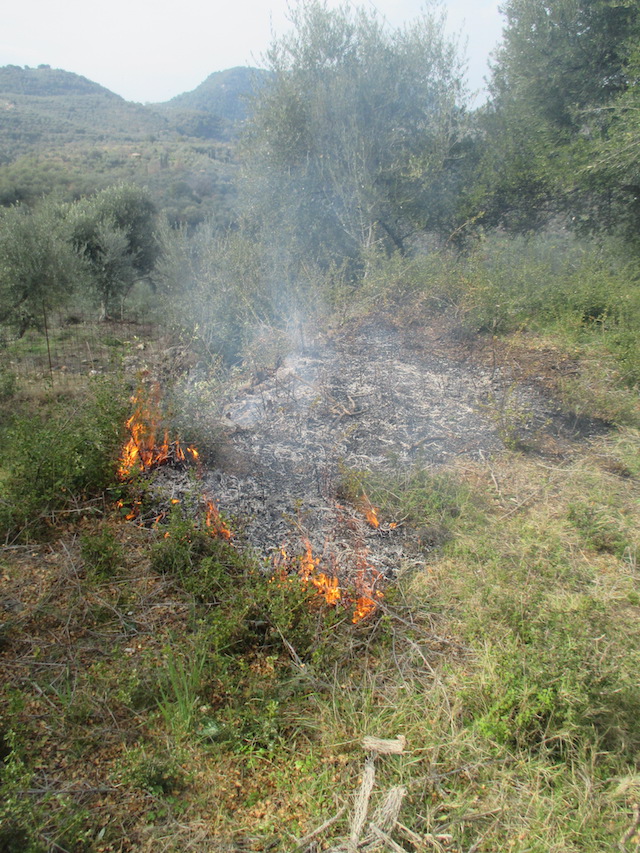 In two months I shall be back at the hovel near the village of Kambos. My main job is rebuilding it. A secondary job is introducing new trees to the areas I really have cleared of frigana and splicing domestic olives onto wild olive trunks which I shall create with Nicho the Communist. But my third job will be to brave the awakening snakes and wage war for the fourth year with my enemy the accursed frigana. This year it is all out war...the last battle.