Dusseldorf attack - Orwellian use of Yugolaslavia by Police, why not blame Donald Trump

You will remember that the killer of Jo Cox MP had a long history of mental health issues yet sections of the mainstream media still term him a right wing extremist. In Dusseldorf in Germany last night a man attacked folks with an axe injuring seven and he has already been branded as mentally ill. He may well be but the Police, without questioning from the liberal media, are also insisting that he hails from the former Yugoslavia. This is Orwellian.

The rozzers know full well from where in the former Yugoslavia he hails. That country has not existed for more than 15 years - Croatia and Slovenia declared independence in 1991. The old bill might as well have said that the man came from the former Austro-Hungarian Empire. Frankly there are all sorts of loons in parts of the former Yugoslavia but the cynic in me wonders if this is an Orwellian way in which Germany's Ministry of Truth can NOT say that the chap is from Kosovo or Bosnia, in other words, since those areas have been ethnically cleansed, that he is a Muslim. I wonder if he he had been a Serb nationalist would not the Ministry of Truth have been shouting that from the rooftops just to show that this was not yet another attack by a Muslim. We shall see.

Whoever it is, it is in immigrant and that will fuel an even greater backlash against Mrs Merkel's open door policies of last year which she now seems to be trying to reverse. Most Germans seem to want to stop immigration and even send home those migrants who are dangerous or nutso liker, er...that chap with the axe in Dusseldorf.

Yet it was just nine days ago that the liberal elites of that City identified the real enemy...Donald Trump. As you can see below their satire was tasteless. Yeah lets joke about decapitating The Donald because he wants to protect America - now just how many jihadist attacks have there been on Germany in recent months?

For the record there have been major incidents in Hanover in February 2016, Essen in April, Wurzburg, Reutlingen, Ansbach and Munich all in July and Berlin in December, which left 22 people killed and 112 wounded. But the liberal elite still think that the joke to tell is about about cutting off Trump's head to make the world safer and more free. 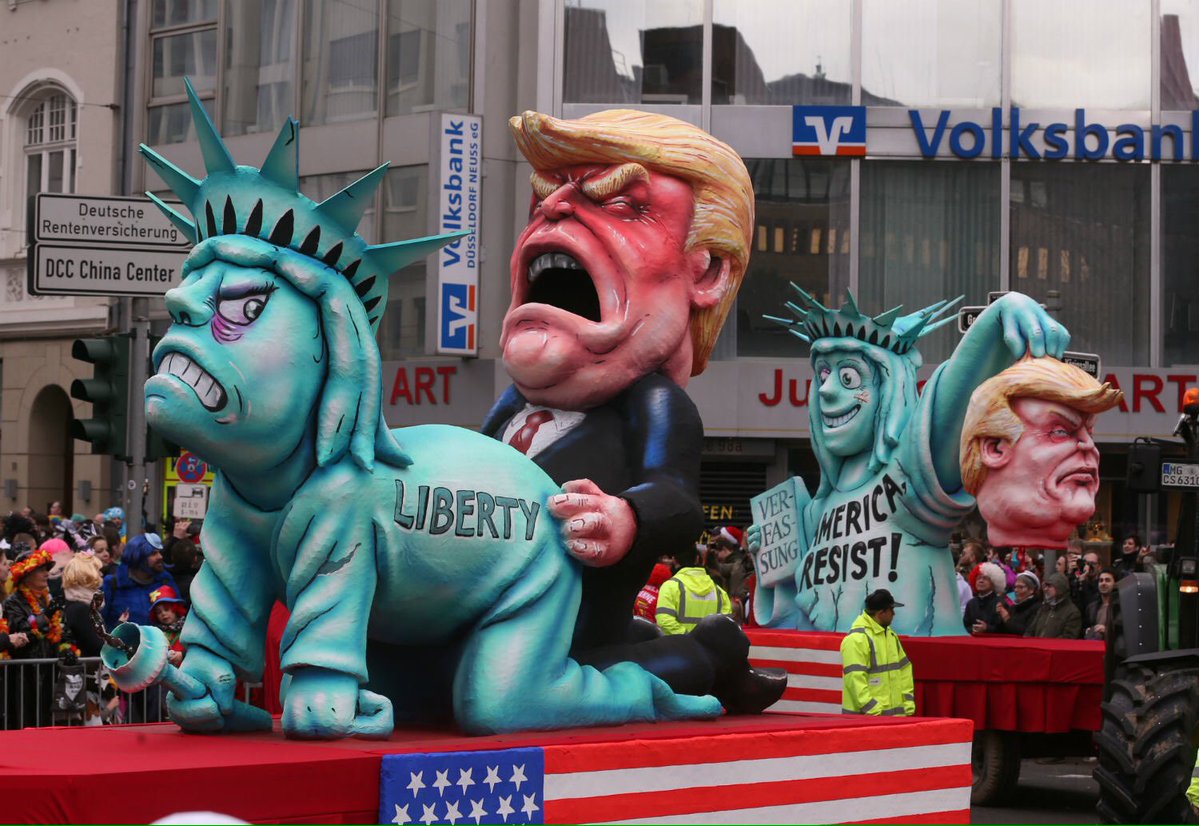