Channel 4, its fake news on the Westminster attack, its cover up and the dumb SNP MP who swallowed it

My coverage of Channel 4 Fake News has been extensive. It just makes up lies and pretends they are facts. But yesterday it reached a new height of fake news and then tried to cover it up. A proper editorial organisation would have a full enquiry and heads would roll. But this is channel 4 fake news, which allows US reporter Kylie Morris to state that Donald Trump had promised to make America "more white" which he quite simply had not done. This is fake news central. Yesterday it was the Westminster terror attack.

Other outlets and photos on twitter suggested that the attacker was Asian, Channel 4 named the culprit as Abu Izzadeen a gentleman who is clearly not Asian but black and was formerly known as Trevor Brooks. Mr Brooks looks nothing like the attacker. The evidence was everywhere that it could not be Brooks but to the C4 liberals, I guess, all those darkies look the same. The Independent Newspaper - another stronghold of the metropolitan elite - was running the same line. But but about half way through the programme C4 was saying that maybe it was not so sure about its lead story.

The truth was that Abu's lawyer had gone public to point out that his client was safely ensconced at Her Majesty's Pleasure. It could not have been him.

So what was the "source" that C4 Fake News reporter Simon Israel had cited as saying Abu was the killer? Was it The Independent or the same source as the Indy? And why did C4 ignore the evidence of its own eyes that the attacker was clearly Asian not black?

What happened next was shameful. There is a channel C4 +1 where I - and others - tend to watch the news. I tuned in at 8 PM and the programme started but after 30 seconds it stopped and on our screen a message appeared saying that the programme was "temporarily unavailable". That continued all the way through so that the fake news was covered up. There was no admission that C4 had got it wrong just a cover up. And no admission that C4 needs an urgent enquiry into its culture of fake news.

Meanwhile on twitter the SNP MP John Nicholson was all too keen to lap up C4's nonsense. A man whose entire career has been spent in the Westminster bubble firstly with the BBC now as an MP seems to dismiss the idea of going to original sources but just takes reports from fellow members of the liberal media establishment as gospel. That Mr Nicholson is an idiot is clear from the tweets below.

What is critical here is whether Mr Israel can demonstrate that he had a real credible source or was he simply relying on the fake news in the online Indy? Let's tune in tonight to see if C4 wants to come clean. Somehow I doubt it will. 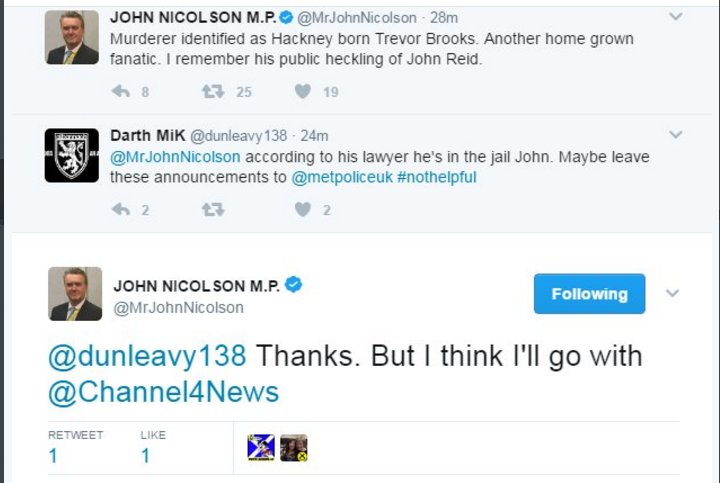