Hillary Clinton blames sexism for her electoral crushing but admits there may be other issues, such as what your crookedness?

Poor Hillary Clinton is all over the news discussing her electoral crushing by the Donald. Liberal media poodles at CNN were told that the main reason she lost was sexism. All those bloody glass ceilings. Yeah right. But her crookedness admits there may have been other issues. But what might they be? Here are a few for starters. A few Hillary will not mention.

1. She's a crook and everyone knows it. From Whitewater to Cattle Futures to leaking her Hedge son-in-law private Government papers on Greece so he could trade bonds with an edge, to all those Dodgy pay to play Clinton Foundation gifts, Hillary is a crook and American knows it.

2. She smeared and put down women who accused her husband Bill of rape and sexual harassment. She is the anti-feminist rapist enabler. And American knows it.

3. She is a warmongering bitch who sends kids from poor neighbourhoods ( i.e. army grunts) to fight pointless foreign wars with no rationale. Some of them die others come back with limbs missing.

5. She was demonstrated to yell lie after lie on the stump. No-one believed a word she said. The cover up and contradictions over her health scares were a case in point.

6. The Dems fixed their own nomination to ensure she got the nod not mad Bernie Sanders. Not even her own party liked her.

7. All the Hollywood luvvies backed her. Being lectured by airhead millionaires who clearly don't know what they are talking about is not an electoral turn on.

So she is a lying crook who enabled a serial rapist, backed by millionaire airheads who despises most Americans and is out of touch on most, if not all, issues, she is a warmongerer who can only win rigged ballots. It is not that Hillary lost because she was a woman but because she was, perhaps, the worst candidate in US electoral history. When will her crookedness finally accept that? 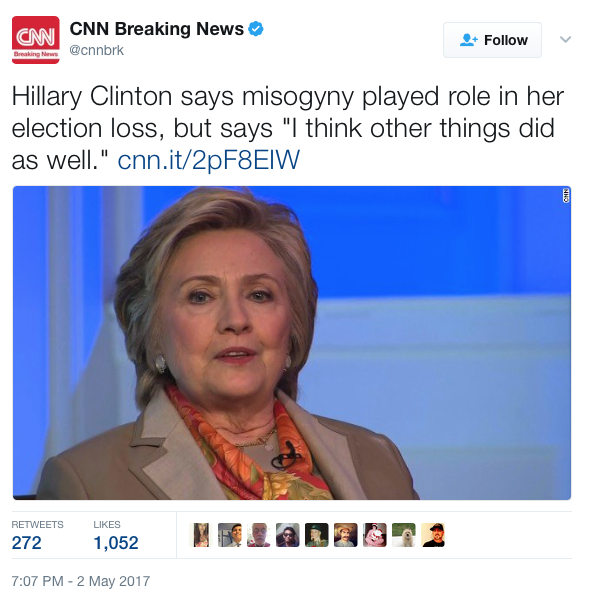